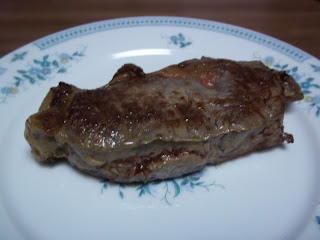 Cooking a steak is a bit like housebreaking a dog, learning how to ride a bike, or buying a used car. Everyone who has ever done it, even once, has an opinion on the subject.  And sometimes all of the opinions are different.

Despite having been a meat eater for well over a year and having cooked chuck roast, London Broil, and so forth, I hadn't cooked a really good steak until now.  My mother--when she cooked--used to make steak by tossing it in the broiler and hoping for the best. By the time she stopped cooking, I had stopped eating steak (which I never liked because it wasn't deep-fried or in a bun). After the divorce, she began microwaving her meat because it was faster and required less cleanup.

I've found since going back to meat that I like many of the plain, meaty, non-sugary flavors I couldn't stand as a child.  Ever since writing an article on grilling I've wanted to cook a steak, but I don't own a grill,nor can I justify the purchase of a grill for cooking for one person. Also, steak is 'spensive and the cheapskate in me is eternally at war with the food blogger inside of me (and it's pretty obvious from this blog which one usually wins).

I rationalized also that for one person, even a grass-fed antibiotic-free steak wasn't that much for one treat meal ($7.50 at Wegmans, at $9.95 a pound). 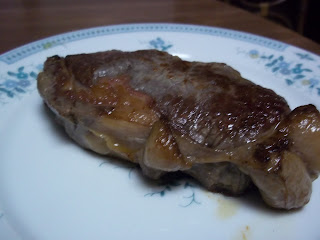 So, based upon the foodies I 'interviewed' and some extensive Internet Googling, the consensus that emerged was that the best way to cook a steak without a grill was to:

1.  Salt the steak on both sides (I used approximately 1/2 a teaspoon for the whole steak) with coarse sea salt and let the meat rest for 45 minutes.
2.Preheat the oven to a smokin' hot temperature (I used 500F)
3. Heat a skillet super- hot (preferably cast iron). You can lightly oil the skillet or use melted butter if you are worried about sticking (just don't use EVOO in this application). I didn't grease my skillet, and according to some sources, if you heat the pan hot enough and truly let it sear, the meat's fat is enough to prevent sticking.
4.  Sear approximately three minutes on each side.  Then cook for approximately 3-5 minutes (depending on thickness and desired level of doneness) either in the oven-safe cast iron skillet or another pan.
5. Let rest for at least ten minutes before slicing.

Because I had a lean, grass-fed steak I was way paranoid about it overcooking and pulled it from the oven at exactly three minutes.  Although it looks super-rare in the picture, I was amazed by how tender it tasted.  Without seasoning, it had a very complex flavor.   Although now I'm less paranoid, I will leave it in for a bit longer to make it 'medium rare.' 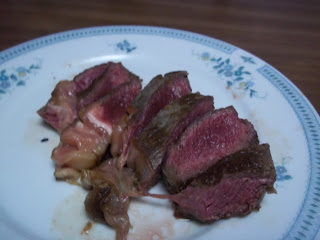 As I said, although the meat was very lean, you can see how it did have a large chunk of fat hanging off on one side....not that I am complaining...

Based upon my experience, I would totally recommend grass-fed beef by its taste, despite the fact that all of the butchers I talked to said it was inferior in taste to heavily marbled, corn-finished, conventionally raised steak.  Of course, corn-finished conventional beef is what they specialize in so......evaluate those statements with a heavy lashing of (sea) salt.


This won't be the first time I cook a steak, and I have a number of methods to choose from if I want to vary my 'technique.'


So, other than grilling, how do you, Dear Readers cook your steaks, other than the grill?  Any really unusual methods.

It's an important question, given that even people without grills no doubt come home from a long day of work every now and then and want to cook a steak, quickly and not 'mess it up' because of how much it costs.

I suppose the quickness and convenience of steak is why it has a reputation as 'bachelor food.'  Men who consider it a mark of high testosterone levels not to know the difference between baking soda and baking powder pride themselves on being able to cook a good steak.

An interesting point--even if steaks seem pricey, TV dinners and fast food meals nowadays cost in the 3.50-4.50 range, so a good, filling grass-fed steak is a way healthier, low-carb meal than a Lean Cuisine or an Extra-Value meal.  Throw some .99 a pound broccoli with your fancy-pants steak and you can dine like a real king (not a Burger King) for under ten bucks.

The broccoli is important, though--this may be an urban legend but I did once hear of a friend of a friend who, on his 'first job' subsided on nothing but a pot of coffee all day (too lazy and cheap to eat breakfast and lunch) and a steak at night, eventually giving himself an ulcer or some other nasty stomach complaint.  I've also heard rumors about frat boys giving themselves scurvy subsiding on beer and hot dogs...but overall, I have to say, I really felt good about eating a nice steak and veggies (and had some left over for lunch the next day) and can't wait to experiment with some different methods.