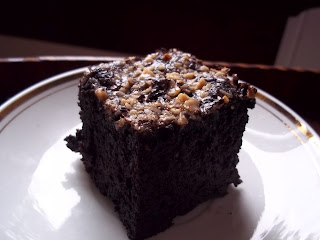 It's my version of consequence-free gossip.

I think most normal people just look for one or two relevant suggestions, especially when there are 510 comments, as in the case of Alton Brown's recipe for Cocoa Brownies.

I love trying to pick out what went wrong with a recipe for the cook or (my favorite bit of fun, and probably even more useless), trying to find out what his or her dietary obsession or hang-up might be...I take particular glee in people who hate vegans and feel compelled to comment on vegan recipes (where is the bacon?) or vegans to like to comment on recipes for chicken (can you use Quorn in this?) And in every recipe, no matter how modest, there is always one person who feels compelled to substitute applesauce for some of the ingredients.

Mercifully, none of the commentators on the brownie recipes tried to make this low-fat or vegan, but some cooks complained about a grainy, powdery taste and said they decided to reduce the cocoa to 1 cup.  Others added an extra 1/4 cup of cocoa powder. Still others suggested a MIX of different brands of cocoa powders.

Others complained that 300F for 45 minutes was too cool and too short a cooking time (the brownies for some of the bakers took up to an hour and a half to bake).    My favorite comments are ones like Number Eleven:

"After reading all the comments, I almost didn't use this recipe. I changed a few things and the brownies turned out PERFECT!!!! Alton Brown: Here's what you need to do to make this the best recipe ever:
3 eggs, 1 cup sugar, 1 cup brown sugar, 1/2 cup butter, 1/2 cup veg oil, 3/4 cup cocoa, 2 teas vanilla, 1/2 cup flour, 1/2 teas salt.
I lined an 11 X 7 inch glass pan with parchment paper and baked for 45 minutes at 325 degrees. Do not cut the brownies for a few hours later until they are completely cooled.
You will NEVER go to boxed brownies after trying this recipe. Let me know what you think!"


Um, you are not rating Alton Brown's recipe.  You are giving YOUR recipe, which is a totally different thing.

Based on my experience with the recipe, I think the main problem with the original is the instruction to bake it until a toothpick comes out 'clean.'  In my experience with brownies, many brownie recipes are best when you take the brownies out while still slightly moist and jiggly in the middle.

I cooked my brownies for five minutes more than the suggested 45.  They were still not 'set' but I let the brownies 'rest' and then chilled them overnight before cutting in the refrigerator. I lined the pans with overlapping nonstick foil to make them easier to extract rather than just buttering and flouring the pan as Alton suggests.

I should also note that I just stirred the ingredients together, rather than creamed the melted butter and sugar until fluffy, ignoring Alton's instructions to do so.  I didn't bother to sift the ingredients, merely 'fluffed' them with a fork before measuring.
However, I think the main problem was the 'doneness' factor.  A 'done' brownie isn't the same thing as a 'done' cake.


Regardless, the result was pure brownie awesomness. I'm including the recipe, as I made the brownies below, but you can always go back and read the original (plus the comments for a chuckle) or to make additional tweaks of your own.

1. Preheat oven to 350F.  Line an 8x8 pan with overlapping nonstick foil.
2.  Melt butter in a pot, cool thoroughly before adding the eggs and vanilla.
3. Sift sugars, flour, cocoa, and salt together.  Add dry mixture to the pot of melted chocolate, eggs, and butter, 1/2 cup at a time.
4. Mix until just barely combined.  Pour into pan. top with a layer of Heath Bar Toffee bits.
5. Bake for 45-55 minutes.  Center will be slightly moist.  Cool for at least an hour.  Refrigerate overnight.  Cut the next morning into bars.


Posted by chewingthefat at 1:35 PM