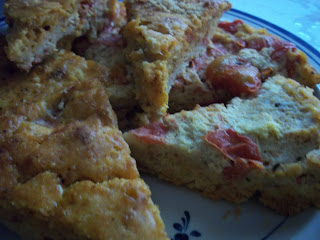 Every now and then, I'll walk around with a Great Idea buzzing in my head. When I was younger, the Great Ideas tended to be novels and plays, sometimes poems.  When I was a graduate student, I'd occasionally think of some philosophical concept that I was sure would revolutionize the way all of academia viewed, say, Chekhov or pop culture.

Now that I have a food blog, a recipe idea will occasionally possess me.  This time it was: "why not roast some tomatoes and put them in a version of your blue cheese cake?  Only instead of using blue cheese, use Parmesan cheese. The Parmesan-tomato combo is always a winner."

So, I roasted some tomatoes using this recipe, made the bread (substituting 1/4 Parmesan grated cheese instead of the blue cheese) and plopped the tomatoes in the bread.  Then I sprinkled 2 extra tablespoons of grated Parmesan on top.

I felt very smug as it baked and the smells of thyme, rosemary, and Parmesan permeated the house.  I was polishing my shiny medal for: "Best Baker in the World" in my head.  Going through the final lines of Dr. Zhivago in my head, only changing them around saying, "how does she do it?  She is an artist!  It's a gift."

When I pulled the bread from the oven, the top was firm and springy.  Then I let it cool, but when I sliced it: disaster.  The moisture from the tomatoes had caused the bottom of the bread to be flabby and saggy. It smelled lovely, but was wet like a damp sponge.

My thoughts on this failure:

1. If I was really, really super-hungry I would have been able to eat the bread.  Or back in my binge-eating high school days, I probably could have eaten at least some of it because of the cheese.

2. I still think the recipe has legs, if you use sun-dried tomatoes.  Dried being the operative word.

People often say that 'baking is chemistry, while cooking is..." (fill in the blank--artistry, biology, whatever).  I am not sure I buy the cooking versus baking distinction, given that I know many fine cooks who are also talented bakers and many bakers who can cook.  What I will say is that a cooking failure is usually at least marginally edible by someone's standards, at very least a hungry teenage boy's standards.  Baking failures, on the other hand, don't even bear resemblance to food.  No one wants to eat a sponge. 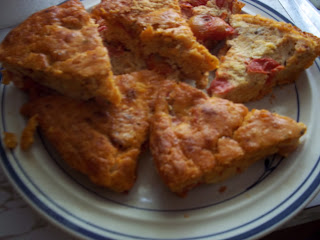 Posted by chewingthefat at 3:10 PM

Email ThisBlogThis!Share to TwitterShare to FacebookShare to Pinterest
Labels: failures