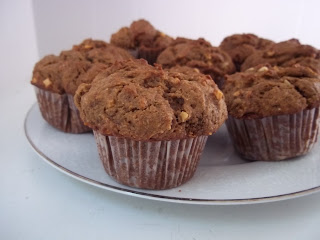 I complain so much about my parents' bad food habits on this blog, I really should admit that from time to time, I was wrong. As a kid, gazing at my mother's peanut butter and jelly sandwiches on rye--RYE BREAD WITH SEEDS--I considered her failure to give me a dainty pbj on Wonder Bread in my lunch box to be akin to child abuse.  While I still take issue with the SEEDS, I have obviously grown to appreciate that she was a kind of accidental culinary visionary when it came to rye bread and peanut butter.

Peanut butter and rye sandwiches have almost become a trendy pairing of sweet and savory.  For awhile, I have been thinking...should I go there...no one else is going there. Then, my blogging friend Anna at Cookie Madness recently published a recipe for peanut butter and rye flour cookies. I figured if someone who is as serious a baker as Anna is willing to throw rye flour in peanut butter cookies...I have license to bring my idea to fruition.

Oddly enough, although I felt persecuted by the persistence of rye bread in my packed lunches, I did like peanut butter and banana sandwiches, perhaps because the sweetness of the banana counteracted what I tasted as the bitterness of the rye.  That, and when I finally had one, my mother had switched to seedless rye.

I still have flashbacks about grape and strawberry jelly and caraway seeds, but I'm working through that.

I remember the peanut butter and banana sandwich was MY IDEA.  I remember the first day I ever had one.  I was reading a book at home about a group of children-detectives (of course) while simultaneously playing solitaire with my mother and because the kids in the book were eating peanut butter banana sandwiches, I had to have one for lunch as well. Much to my surprise, she joined me.  My mother never ate what I ate, usually--I don't remember her eating lunch when I was small, period.

"You know what is also good," my mother the carnivore said. "Peanut butter and bacon."  I had those occasionally as well, later on, but because I wasn't much of a meat eater back then (nor would be for the next thirty years), they didn't become a staple.

I have to admit that the peanut butter, cheese, and bacon on rye looks kind of good.

But I digress. There is something very special about a pb&b. You have to eat it at home, unlike a regular pb&j, because the banana will turn brown if you don't eat it immediately.  It's the perfect summer sandwich to have in the garden, or swinging on a swing. Of course, you might have one of those mothers who makes you a peanut butter sandwich and gives you a little knife to slice the banana onto your bread...but most of us don't...

An excellent solution to the dilemma of packing peanut butter and banana sandwiches that don't go brown would be to pack these muffins instead, for those of us who are old and have to work over the summer. These are sturdy and hearty, thanks to the rye flour, yet sweet with banana and dark brown sugar.  I used natural chunky peanut butter, the kind you have to stir and I like the rustic complexity the texture it gave to this very simple recipe.  These muffins are wonderful on their own, but in the spirit of the recipe's creation--throw caution to the wind.  Smear them with butter or honey or more peanut butter.  Eat then with crisp bacon in the morning.  Just don't put caraway seeds in them and eat them with Smucker's grape or strawberry jelly.

2. Mix the oil, sugar, banana, and peanut butter together. Sift the flour, salt, baking soda and cinnamon. Incorporate the dry into the wet.

3. Pour the batter into the muffin liners or pan.

4. Bake the muffins for 18-20 minutes until a toothpick can be extracted clean (if you use a loaf pan, obviously the cooking time will be much longer, probably slightly under an hour).

Posted by chewingthefat at 4:45 PM