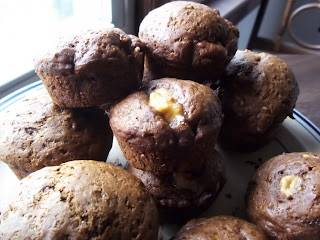 I remember the last time I made a New Year's Resolution. The grown-ups were deep into their second or third glasses of table wine on New Year's Eve, when they started to make resolutions.  I wanted to feel included, so I read my resolutions, which I had written down in a book called Amazing Days, a holiday craft and activity book for kids. One of my resolutions was to eat my tomatoes, a vegetable that I loathed, except on pizza or in ketchup. It was the 80s, and even President Reagan said ketchup was a vegetable, after all. My resolution lasted all of a half an hour, until my mother served the salad course.

"What happened to your resolution to eat your tomatoes?" she asked.

"I resolved to eat my tomatoes...as long as they were not MUSHY," I protested.  I ate the croutons and the green olives from my salad, and left the rest.

An observer would be inclined to think I had a faulty and irresponsible character--and they could be right--however, in retrospect, given angry food writers' fulminations against store-bought tomatoes, I would prefer to just see myself as a budding foodie with good, discerning tastes. I rejected the pink ping-pong balls doused in Wishbone Italian because I was a seasonal eater.  Except for pimento-stuffed olives.

Despite my allergy to resolutions, I have to say that I have accomplished some things this year.  Other than Fage yogurt (which doesn't 'count' in my eyes), I've pretty much eliminated all processed foods from my diet.  I've gone back to eating dairy on a regular basis, along with some fish and chicken, and feel better for doing so. (No more soy mystery meat).  I can sort of prop myself up doing a headstand in yoga, which is better than when I started practicing.  I'm more confident in my horseback riding, even though I still feel I should be farther along, based on how much I love horses and riding horses.  I'm not a famous published author but I've been reasonably consistent about updating this blog. I run. I floss. I try to do stuff, even if I'm not good at stuff. I eat broccoli and I recycle.

I do have goals but I don't make New Year's resolutions. My resolutions tend not to come at crisis points though, but tend to evolve over time.  Almost as a shock or surprise, I realize: "hey,  I've kinda made progress to getting to X."  I keep wanting to have an accomplishment that is gold-star, blue-ribbon good, though.  I have no trophies to put on my mantlepiece, except dusty second and tenth-place debate trophies from college.

I actually don't even have a mantlepiece, so when I get a trophy, I guess I'll have to fix that as well.

These are pretty healthy muffins.  I've made them both with milk and also almond milk, the latter for a vegan friend of mine.  The original recipe is a quick bread, but I'd suggest muffins instead because this batter is so sticky and dense it's difficult to check if the bread is cooked thoroughly inside at all points of the bread. With muffins, it's much simpler to be sure.

4. Pour in muffin tins.  Bake 25-30 minutes, until a toothpick can be extracted 'clean.'  Can be eaten after cooled, or, for best flavor, wait a day, giving the flavors time to 'set.'  Of course, this takes discipline, which I have very little of, regarding food.

Posted by chewingthefat at 7:53 AM