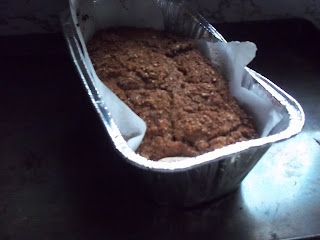 Last night, I was reading As Always, Julia: The Letters of Julia Child and Avis DeVoto. The book is a collection of the letters exchanged between  Julia Child and Avis DeVoto, the latter of whom was the wife and personal ‘secretary’ of Bernard DeVoto. DeVoto was a liberal newspaper columnist and Child wrote to him in appreciation of a brief rant he'd penned on the dullness of American kitchen knives.  Avis responded, and the two women exchanged letters for many years. The book overlaps with the time frame of My Life in France, but also stretches beyond it, and includes Avis ‘beta-testing’ some of Julia’s early recipes; discussions about the poor quality of American spices and America’s strange obsession with chicken versus other fowl; and both women’s eviscerating criticism of McCarthyism.
It’s quite charming to read letters, in the Internet age.  Can it be that people once used to write on a piece of paper, put down the letter to do something else, and then had to mail the document with a stamp?  The letters are long, and contain many ‘breaks’ within them, as life intervened before the letter could be finalized—it’s hard for me to fathom such a laborious form of communication today.
I fell asleep reading the book and had the oddest dream.  Suddenly, Julia Child was in my kitchen, and I was making my usual ‘breakfast bread.’
Julia: What are you dooo-ing, Marie?
Me: Er, nothing?
Julia: It looks like you are cooking some-thing.
Me:  Well, this is sort of my embarrassingly simple breakfast  bread. It’s something I came up with on my own. The bread is surprisingly good, given how healthy the ingredients are, and how low in calories.
Julia: Are you on a diet?
Me: No, but I do feel better if I eat relatively low sugar, high fiber foods. The applesauce and the cinnamon in the bread give it a nice sweetness.
Julia: No butter? No heavy cream?
Me: Um, I like to eat the bread with a tablespoon or two of natural peanut butter!
Suddenly, Julia vanished into thin air and I woke up.
I’m sorry Julia, but I must admit I like this bread. It’s not terribly decadent I guess.  But I know from reading your own words that you admit to have felt slightly ‘bilious’ after testing a series of duck and goose recipes, and needed to detox for a bit. For those of you without the iron constitution of zee French Chef, who like not-too-sweet, bran, whole wheat bread, I think you’ll be pleasantly surprised.  I plugged the recipe into a calorie count website (because I hate when things are advertised as low calorie without actual ‘counts’) and the calories in the entire bread average around 750-760, if you consumed all of it in one fell, fibrous swoop. 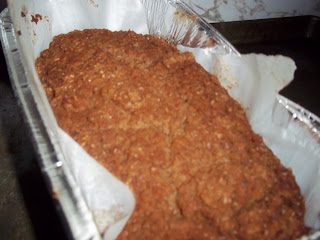 Low-calorie vegan 'health' quick bread
1 cup unprocessed wheat bran (I used Hodgson Mill--approximately 125 calories for a cup)
1 cup white whole wheat flour or whole wheat flour (Approximately 400 calories for a cup)
1 1/2 cups unsweetened applesauce (I used a commercially-bought variety, which clocks in at around 150 calories for this serving amount but extra props of you use homemade stuff)
1/2 cup hot water (zero calories, last time I checked)
2 tablespoons flax seed + 6 tablespoons of water (or a large egg if you don't care about the 'vegan' aspect of the bread, either way 60-75 calories)
1 teaspoon baking soda (Calories? Don't worry about it)
1 tablespoon cinnamon (or other spice combination of your choice, and if you're worried about calories in spices, go have a Tic-Tac instead and stop reading this blog)
1 pinch (or more, if you're like me) of sea salt 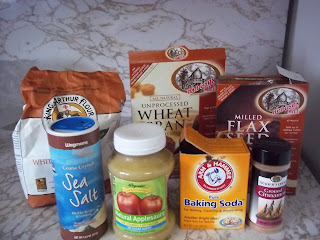 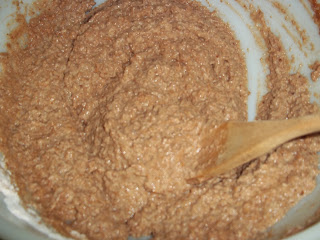 2. Mix the ingredients together in a bowl (this is fine for a 'one-bowl, dump and stir' procedure). Pour into the prepared pan.
3.  Bake for approximately an hour for the loaf pan, or 40 minutes for the flat cake pan. Make sure the top of the bread is resistant to your touch, to test for doneness.
4. Cool. Because the bread is so moist, cooling overnight is ideal. I'd suggest making the bread in the evening and having it for breakfast the next morning.
Posted by chewingthefat at 9:00 AM