Sometimes yoga just gets all weird...

I walked into a Friday night yoga class and saw what I often see when I stroll in--a tall, thin blonde woman with a belly ring doing a handstand while the instructor says "good job" and "nice." Kind of like a yoga coach!

It had been a long day so I lay down on my mat to rest up before we began to practice.  One of the nice things about yoga is that if you lay down with your eyes closed, it is technically considered a pose, so people don't bother you (unlike NJ Transit or airplanes, for example).  But soon I felt someone tap my shoulder.  I opened my eyes and saw the blonde woman standing above me.

"I wanted to invite you to something, Mary," she said, "but I don't have your email address."  She gave me a piece of folded paper.

I don't know why, but my first thought was "oh, a party for yoga people."  A party! Like I am seven years old!

Clearly I had been reading too much Hyperbole and a Half, though, because after she left when I opened up the paper it said: "Join K.G.'s Enlightenment Workshop to transform your life from mediocre to brilliant.  Achieve all you desire: abundance, great well-being, optimism, creativity, a career you love, meaningful relationships, improved intuitive ability. K.G. presents an ongoing dialogue between us and the energy realm where questions posed to non-physical sources are answered on a continual basis, creating a growing volume of information.  This pathway allows for continuing communication between the two realms thus enabling the human realm to expand in awareness."

The workshop was being given at the yoga student's house and was $35 for admission.

My mom once attended a Tupperware party (only to be polite, she hated Tupperware) and I was invited to a 'handcrafted jewelry' party by one of my neighbors. She made it clear that feathers, beads, and lots of jade were involved. I didn't attend and I worried because my neighbor was a bit cool to me for several weeks afterward.

After practicing, another student tapped me on the shoulder as I rolled up my mat.  I hadn't seen this woman in a long time.  She is one of those waif-like creatures who weighs about 15 pounds less than me, I'd estimate, yet can easily bike 40 miles a day before heading off to work in a manner that makes my 6-7 miles running seem wimpy. She has struggled with tremendous physical challenges that would break the average person--knee surgery, a terrible biking accident, back pain--and bounced back in half the anticipated recovery time, thanks to her dedication to rehabilitating her body.

She can also do pretty much every advanced yoga posture in Light on Yoga.  One of the teachers is always like, "X is PERFECT" whenever she does something (even though supposedly there is no perfect in yoga, only practice) and references her for all of his information on Buddhism and philosophy.  But I only have a M.T.S in Religion from HDS from a million years ago so whatever.

We greeted each other and somehow the conversation turned to food.  When she heard that I was eating meat again (it had been a long time since we spoke), her little face crumpled like a prune.  She held her thin hands to her bony chest in a very worried way.  "Meat!" she gasped. She took a good look at me and I guess she was looking for some visible signs of ill health and disease from eating salmon and chicken. But I guess she couldn't find them because then her face relaxed.  "What is your blood type?"

"O."  I said. She explained to me that Type Os are the hunter-gatherer types and can eat meat.  "But I'm Type A positive!  I remember when we all got our blood types tested in school, everyone joked that I even got straight As as a blood type.  Type A blood types shouldn't eat meat," she said, since according to the blood type diet Type A dates back to the beginnings of agriculture and thus should be vegetarians.

I'd heard about the blood type diet before. While it has pretty much been scientifically debunked at least it allowed us to end the conversation in a friendly way (I guess I am just a less evolved hunter-gatherer type, that's all).

Which I have come to realize, partially from doing yoga, is really the most important thing: not arguing.  And I can't criticize, since blood type or not, she is doing something that is working for her although it didn't seem to work for me. 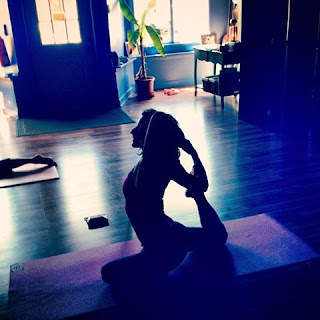 Sometimes you just have to breathe and let things go, even in yoga.  Well, unless your yoga is Yoga Booty Ballet, because then I will judge the hell out of you.

Posted by chewingthefat at 8:46 AM

Email ThisBlogThis!Share to TwitterShare to FacebookShare to Pinterest
Labels: About me, yoga; about me; rant; humor