Going to the dog's (food)

Sometimes I think when we feed our dogs, we are feeding ourselves. It can be so difficult to control our relationship with animals. Food is the one thing we do have control over, versus sitting, staying, jumping, barking, and pooping. We feed our need for control.  And maybe over our own diets, too. It's hard to resist a craving for food, but with a dog or cat you can actually try to craft the 'perfect diet.' for the animal. Of course, some people go the opposite way and overfeed, desperately trying to prove that eating junk food isn't terrible because "my dog eats it all the time and she is fine."

I recently decided to change my dog's food.  She's been eating the Wegmans generic version of Beneful (same ingredients, just the store label) for many years, but then I noticed that Wegmans recently added high-fructose corn syrup to their formula.  Since I consider high-fructose corn syrup to be THE NUTRITIONAL EMBODIMENT OF EVIL (i.e., my Moriarty/ Lord Voldemort/ Lex Luther) I knew I had to find her some new food. She obviously had no say in the matter.

I once read an article by a woman who tried various kinds of dog food, just out of curiosity. I love my dog, but I'm not willing to go that far for blogging.

There is quite a bit of evidence out there (most of it contradictory) about what to feed your dog. I think part of the problem is that dogs are omnivores--like us--and there are some parallels between how and what humans eat and what dogs eat. There has been a recent explosion of gluten-free, dairy-free, wheat-free, corn-free, and soy-free dog food and a corresponding explosion of interest in human diets that meet all of these conditions. There is even vegan dog food. You know all of the micro-managed dogs are drinking from puddles and toilet water and lusting after road kill when their owners aren't looking.  And it bugs me when people call their dogs vegan or gluten-free.  You may feed it vegan or gluten-free food, but if there is a squashed Big Mac on the road, it's not going to call PETA  or eat the burger and not the bun to avoid the wheat, it's going to try to eat the whole damned thing.  Dogs don't make their diets part of their internalized 'identities' like humans.

I haven't found the secret to the optimal diet for all dogs.  My first dog was a stray and very, very picky.  She would eat a bite of Mighty Dog, cover her nose, retreat to the back of the room, then take another bite. Despite not being a 'dog person' my mother insisted on feeding her people food because she felt guilty, kind of like how she would nag me about eating sweets and my weight and then give in when I begged for those waxy chocolate-covered doughnuts in the supermarket or sugary McDonald's.  When I was in college, my mom cooked more for Lucky than she did for herself.

My current dog eats dog food. My mother passed away when Asta was two, and I am sure Asta thinks of those years as the Golden Age when my mother fed her steak, Swiss cheese, and peanut butter when I was at work during the day.  However, she weighs about three pounds less than she did when mom was still with us.


Still, I haven't been using a 'healthy' dog food. So I have felt a little bit guilty all these years, buying my broccoli and Greek yogurt while getting her the dog food equivalent of, if not sugary cereal, than one of those kinda fake 'good for you but not good for you cereals' like Raisin Bran. As a puppy, I tried to get her to eat numerous high-end foods but she seemed very unenthusiastic about eating the brown, lumpy homogenous grain versus the brightly-colored kibble.  Also, the high-end food made her very, er, constipated, because it was so high in protein and low in fiber. 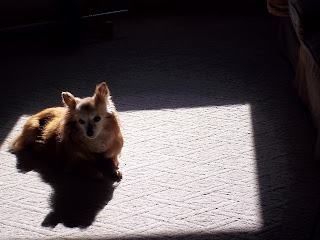 I couldn't blame her for hating the healthy dog food. It looked exactly like the terrible dehydrated rice meals I used to buy in graduate school when I felt guilty about getting takeout every night.  I'd try cooking that stuff, watch it adhere to the bottom of a pot, and then spoon the muck into the garbage.

Since she has been healthy and flourished on the food I was giving her, I never really looked into brands until now. I nearly had a meltdown in PetSmart. It seemed terribly ironic after dealing with so many people who avoid gluten in my yoga classes that I was now faced with an entire aisle of such products.   But then again, I'm really neurotic about carbohydrates and all of the formulas promising giving a dog an 'ancestral' diet cut a bit close to home. Perhaps I should just buy an organic, grass-fed cow for both of us and call it a day?

I looked into home-cooked meals and raw food, but was terrified to read about dogs getting broken bones from not enough calcium from homemade dog food and pancreatitis and intestinal parasites from 'going raw.' Besides, even the homemade formulas had added supplements to make them 'balanced,' which seemed to kind of defeat the point of going 'all natural.' And I kinda resented any recipe that was called 'easy cooked dog food' that began with 10 pounds of ground beef. There is nothing easy about cooking with 10 pounds of ground beef.

I found a new, healthier food she seems to like, but I still feel guilt. She cannot choose what she eats and also that whatever bag I buy makes up the bulk of her  nutrition, versus the varied diet that I eat. And I feel if I can find her the 'perfect' food, she will live longer, be happier, and I will be a 'good owner,' whatever that means. 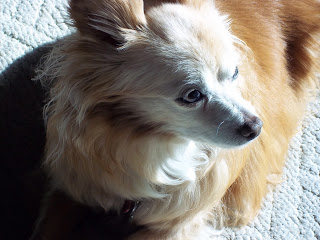 Posted by chewingthefat at 6:45 PM

Email ThisBlogThis!Share to TwitterShare to FacebookShare to Pinterest
Labels: rant