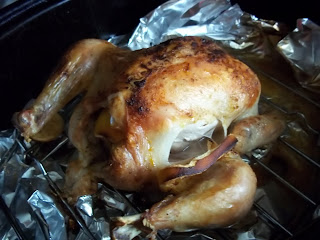 I hate it when someone says: "there is something I have to tell you..." and then says they'll relate what they have to say...later...

Not only is it annoying, but the nature of my brain is such that it takes about five minutes for me to construct every possible doomsday scenario.   I really don't understand why I have never been able to write a crime or a horror novel, because as soon as someone says "there is something I have to tell you," I automatically fill in the words: HORRIBLE AND NOT GOOD THING! IMPENDING DEATH! NEVER SPEAKING TO ME AGAIN!

For example, when I was trying to 'make it' as an actress, I stumbled into a three-week intensive acting training program  that I thought would kick start my acting career.  Instead, it was run by a woman who had 'been through' EST during the early 1980s, and while she had a great acting pedigree (well, she was British, which in my eyes automatically made her a great actress), the program, let's say, was not my cup of Earl Grey.  The first day I had to prepare a monologue and present it to a small group of my peers (even when  was acting, I was notoriously atrocious in audition-type settings) and the acting teacher (who had also been through EST) immediately asked me: "have you ever tried to make yourself attractive?" The critique of my performance mainly focused on the fact that I was wearing no makeup. (At the time, I was like 'dude, I am not wearing makeup because it is REALLY FUCKING EARLY IN THE MORNING and I am a student, which means my brain doesn't start working until after my second class and second cup of coffee.')

Needless to say, although the program did have some good teachers, it was 'not for me,' and although I persisted with acting for several years subsequently, I discovered that being in a profession where people with tremendous power to affect my livelihood could hurl personal insults at my face and disguise them as 'constructive criticism about art' was not for me.

The only good thing about it all was that I made a friend.  Unlike me, he was a very talented actor and the fact that he also didn't embrace the techniques of the program made me feel better about not liking it, and not totally attributing my deficiencies to my admitted sucky-ness as a performer.  We bonded over humor.

However, one morning he DID say to me: "I have something to tell you...I'll tell you later." And for good measure. "You're not going to like it."

My mind went into overdrive, immediately fueled by the lack of sleep and self-hatred fostered by the program.  The thing is, I knew he was gay already.  And I was sure he knew that I knew that he was gay.  But other than that I couldn't think of any secrets he might have--the intensity of his expression was such that I felt like he was coming 'out' to me, even though he was 'out.'  It didn't make sense.

I died several deaths within, not on stage, but in my soul, until that evening.

"Mary...." Pause.  Sigh.  "The thing you have to know about me is...I got 900 on my SATs."
I stared at him.
"What?"
"Well, you seem so...smart...." (he probably meant over-intellectual and stuffy, but he said smart).  "I was afraid that you would find out.  The only reason I got into Bennington was because of my audition and my recommendation from acting teachers."
"Do I seem like the type of person who would care about someone's SATs?  For the record, mine weren't that great."  I remember being incredibly annoyed, thinking he had some horrible terminal illness all day, not simply an aversion to taking standardized tests.

Anyway, it is a life lesson that quite often what we think is awful is meaningless to someone else, and the ethical compromises we have taken for granted in our life can be shocking in the eyes of another.

My big revelation, blog readers, is that I haven't been baking as much recently.  When I started this blog, I had a vision of becoming some sort of an awesome amateur pastry chef.  However, I've experienced many changes in the past two years. I've gotten much more into physical fitness, specifically running, riding, and yoga.  Ever since going back to eating meat and getting more serious about being physically active, I seem to have lost my taste for sweets, and I also don't have as much time to bake every weekend.

So, you'll still see some baking recipes on the blog, but not as many as before, or as often.  I'm sure if I ran less and 'forced' myself to eat more sugar I could get my sweet tooth back I would, but learning how to cook was always about having a healthier relationship with food, and restoring it to its rightful position in my life.  Which I think I have.  A victory of sorts.  One which I am more proud of than any SAT score.

You'll be seeing more savory, healthy, and five ingredients-or-less type food in the near future. 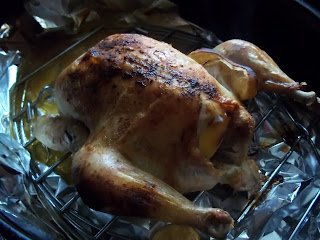 I made this yesterday.  A very simple roast chicken once again, but enlivened by ground ginger and Meyer lemons, ingredients often used in baking, but which can be a great addition to savory dishes.  I used the Thomas Keller method of roasting the chicken.  So quick, it is practically fast food.

1 SMALL organic, free-range chicken (2-3 pounds is ideal, and offers a much better skin-to-meat ratio, as well as quicker cooking)

1. Preheat oven to 450F.  Line the bottom of a roasting pan with a rack with foil.
2.  Pat chicken dry with paper towels; do not rinse. Squeeze juice of the Meyer lemon over the chicken, into the cavity.  Stuff lemon into the cavity of the chicken.
3. Season with salt, pepper, and ginger.
4.  Roast until meat thermometer reads at least 165F, approximately 1 hour.
5. Let rest for 10-15 minutes before carving.  Remove lemon before serving.


Posted by chewingthefat at 9:08 AM