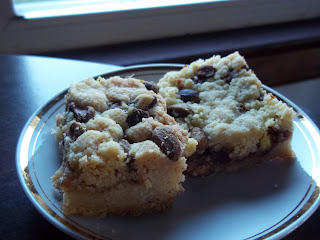 Yesterday wasn't a life-shatteringly catastrophic day, but one of those garden variety crappy days.

I went to the dentist's for my six-month cleaning, and despite my sugary past, I have pretty good teeth, so I passed with a clean bill of health.  Things would have been much worse if I needed expensive dental work, but dangerously I had enough time in the waiting room to read Elizabeth Wurtzel's  article in New York magazine about how miserable she is at age 44.  Wurtzel, as you might know, wrote a best-selling book called Prozac Nation about how depressed and unhappy she was, despite getting into Harvard and having a career as a successful music journalist.  Then she got another book contract to write Bitch, wrote the entire book high on drugs, and wrote her third book called More, Now, Again about how she wrote Bitch while on drugs.  Then she went to Yale Law School on a lark (the most difficult law school to get into in the country), mysteriously got employed by a top firm, and is still totally miserable and has no savings because she blew so much of her royalties on blow, heroin, and Birkin bags.

Clearly, I have done something wrong in my writing life compared to Wurtzel, since I carry around a canvas bag and worry more about the bill than the drill at the dentist.

After bad day some people turn to 'comfort food' like potato chips, macaroni and cheese, or pizza. But I'm no longer the carb zealot (thank goodness) I was in the past, when I would hole up in my bedroom eating sour cream potato chips and creamy onion dip.  There was a book I loved as a kid called The Pistachio Prescription  by Paula Danziger in which the heroine Cassandra decides that eating pistachios is the best way to make yourself feel better, even when Cassie accidentally plucks out almost all of her eyebrows and has to go to school in sunglasses for weeks.

Based upon my literary comparison of Cassie versus Wurtzel, I decided on 'pistachios over Prozac'  (as well as other, more illicit substances).

I admit to be slightly addicted to salty nuts as an adult, and convince myself that this is healthier than the HoHos and Ritz crackers slathered with peanut butter I used to favor in my youth to make me feel better.

These pistachio ribbon bars are both salty and sweet, so they can answer either craving you might have after a bad day. Of course, they do contain some carbs, but one or two of these won't do nearly as much damage as bag of Cool Ranch Doritos.

I adapted this recipe from the Land O' Lakes website. Land O' Lakes has some of the best recipes on the web, perhaps it is because it is a company that produces an 'ingredient,' so most of the recipes are largely 'from scratch.'  There was one complaint in the comments that the bars were too 'gooey,' but I omitted the glaze suggested in the original recipe. Glaze seemed quite literally like gilding the pistachio lily. I also slightly reduced the amount of pistachios and used salted rather than unsalted pistachios (and omitted the salt from the batter itself as a result).

Oh, and I used my friend's homemade strawberry jam, which contains some sriracha, but you can use any type of strawberry (or raspberry) jam. Or make your own spicy jam. 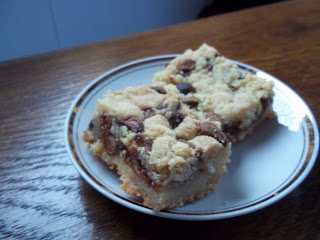 1. Preheat oven to 350F. Grease and line a 9X9 pan with parchment
2. Cream butter and sugar, fold in flour
3. Divide batter in 1/2.   Press 1/2 of batter into pan (use additional parchment to flatten surface). Bake for 13 minutes.
4. Fold pistachios into remaining batter.
5. Remove bottom layer from oven.  Spread with strawberry jam.  Top with the batter that contains the pistachios.
6. Bake an additional 30-35 minutes. Cool completely before cutting into bars. 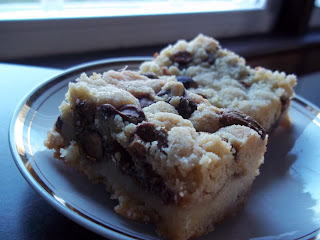 Posted by chewingthefat at 7:48 AM

Email ThisBlogThis!Share to TwitterShare to FacebookShare to Pinterest
Labels: pistachios