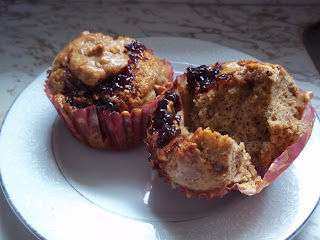 I've never been a trend-setter or a follower of trends. Not because I am a morally superior person, but simply because I'm so bad at being trendy.  My style is firmly mid-90s. Minimalist, lots of blacks, greys, accents of whites, bright reds, and blues. It was mid-90s even when I was five years old in 1979.  Although I grew up in the 80s, whenever I wore stretch pants or midriff-baring shirts or a scrunchie in my hair, I always felt like I was performing a role or wearing a costume. Sadly, the coolness of a girl in the 80s was determined by the size of the scrunchie her hair-sprayed skull was able to support.

But I wanted to be a trend-setter.  True story, one of my proudest accomplishment came in the 5th grade, when I single-handedly started a marble fad on the playground. I didn't mean to do so when I bought my bag of marbles to school. I was a natural collector, like many children (stickers, My Little Ponies, plastic bracelets, Polly Pockets). My mother had given me her collection of pretty, solid-hued marbles, and I had added to it with a newer collection of sparked glass marbles. I brought it in to show it off like a casket of false jewels.  My friends and I played with the marbles the first day, not for keeps, but for fun, but the next day one girl brought in a bag of her own marbles and soon lots of the girls--even some of the boys--were joining in the fun and we were playing competitively.

Marbles is the perfect game for middle school. It is social, but still requires focus and concentration on the physical activity of shooting so no one gets too bitchy. It is a blend of luck and skill, so it lends itself to harmless superstitious rituals. It is acquisitive and dependent upon 'collecting' toys, but the toys aren't worth so much that the game gets crazy-serious.

Everyone soon forgot that it was I who started the fad, but I cherished the knowledge long after, even though there were girls and boys far more skilled than I at the game.

Another trend--one I didn't begin--that has been rocking the food world is the paleo diet. Although I run a baking blog, for most of my meals, I really have been embracing making unprocessed organic meats, non-starchy vegetables, and nuts the mainstay of my diet and reducing my consumption of grains. (I really am not a big fan of rice or pasta, anyway).

I'm not a fanatic--I still have the occasional treat (as you can see from this blog) and you'll have to pry my Greek yogurt out of my cold, dead hands before I give that up.  But I do feel so much better, versus the days when I would eat oatmeal for breakfast, apples, bananas, and chocolate for snacks, sweet potatoes and rice and bean burgers for lunch and dinner...and I really to think I am stronger and leaner as a result.

So I was intrigued at the idea of making 'paleo' muffins,' as a way of baking something I could eat everyday without getting that draggy, carb-ed out feeling that used to be my normal state of being. 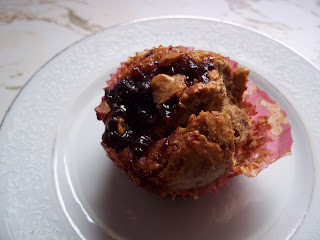 These muffins are made of almond butter, eggs, and baking soda.  You could use any nut butter, although peanut butter is 'officially' prohibited on the paleo diet because peanuts are legumes.  You could also add some sugar, if you like.  Since I baked them with some jam, these do have a little sugar in them, but I used homemade jam without corn syrup or additives. 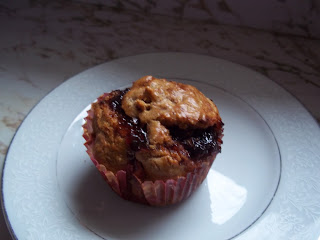 I won't lie to you--they don't taste EXACTLY like fancy, butter-and-sugar infused muffins.  They have more of a bread-like texture than a muffin-like texture.

But for a nice healthy treat, slathered with a moderate amount of butter, it's a great way to 'have your cake yet go paleo too,' in the morning, and save up your indulgence carbs for some cookies later in the week.

Trendy as the little rainbow and unicorn erasers I collected in middle school?  Perhaps, but I think the basic principles of paleo are pretty sound, and even if you don't, these are fun and easy to make for someone who can't consume flour for whatever reason.

6 teaspoons of jam (or other add-ins)

Directions
1. Preheat oven to 350F. Line muffin tin with cupcake liners.
2. Incorporate almond butter with eggs thoroughly.
3. Add baking soda, spices.  Pour batter into liners.
4. Fold in 1/2 teaspoon of jam into each muffin, cover with batter, smoothing with a knife or back of a spoon.
5. Bake for 10-13 minutes, until a toothpick can be extracted 'clean'

Posted by chewingthefat at 7:48 AM

Email ThisBlogThis!Share to TwitterShare to FacebookShare to Pinterest
Labels: muffins;