Ants on a log--with a twist 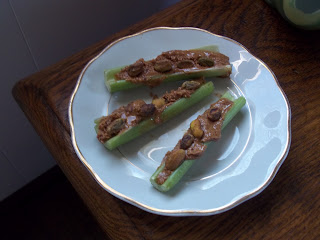 My friend has a teenage son who plays sports year 'round and is still growing.  She can feed him seventeen pancakes in the morning and he'll be asking what's for lunch around 10am.  (I'm assuming the pancakes are relatively small and not diner-sized stacks, but still...)

In an ideal foodie world, all of us would be teenage boys with raging metabolisms. Since I'm 5'1, my memory of being able to eat whatever I wanted, to never feel full, and to never gain weight and to have incredible athletic performance is like, nonexistent.  And personally, I think it's a pretty rare circumstance, even for men--at best, a fleeting period of one's life.

I've never been on a 'diet diet' in the sense that I've never been on a strict program I had to follow like Weight Watchers. I went to one Weight Watchers meeting when I was eleven.  My mother had a friend named Debbie who was on Weight Watchers and mom always talked about how Debbie would go out for ice cream and pizza after every weigh-in. So I am probably the only person who ever went  to Weight Watchers in the hopes of getting some 'za and something from the Circle Freeze afterward.  When I saw the dreary women in bad pants suits ahead of me, waiting to get weighed I nearly ran out of the dimly-lit community center where the meeting was held, and I didn't run very much back then.  I never went back.

Another 'diet' that was suggested to me was also when I was a kid--it was a Xeroxed sheet being passed around my mother's office--went something like this:

And so forth, with slight variations on this theme for the next three days (I believe on day 2 you were allowed cottage cheese rather than meat, for example, and a half banana and cereal for breakfast on one of the days).

At the bottom of the 'diet' it noted that NO SUBSTITUTIONS were allowed, although I can't fathom why the diet designer picked beans and beets as the 'vegetable' component of the diet.   You were also supposed to do the diet for three days, then skip a day, then resume it "because you lose weigh so fast." It was implied that the food combinations had some magical powers, although it's obviously just a very low-calorie, low-carbohydrate diet.

I also remember reading about a diet in a book called The Revolution of Mary Leary, about a fat girl who went on a diet that consisted of eggs, cottage cheese, and a steak every day and lost crazy amounts of weight because it was low-carb.  At the time, I couldn't fathom life without chocolate, but now that diet doesn't seem too bad.  Although I would have to throw some broccoli in there, somewhere.

Usually, in the food blogging word, the blogger posts a few 'diet' foods and then shifts back to cupcakes, but I think for a little while I'm going to be posting more of the foods I eat on a regular basis, like pistachios and almond butter, in case any of my readers are starting to eat a little bit healthier.

I've been told "ants on a log" is a popular, healthy childhood staple.

Of course, I never ate it because even my mother would never have been so foolish as to try to give me celery. Even today I find the idea of raisins, peanut butter, and celery kind of icky, even though I like those food items on their own.

I find less sweet almond butter and salty pistachio nuts on celery to be a much tastier combination.  I like using the celery as a vehicle for the almond butter and pistachios because it slows down my nut consumption, and I have the frightening ability to inhale nuts at a very rapid clip.

I guess you could call this: "beetles on a log," given the bright green color of the pistachios. 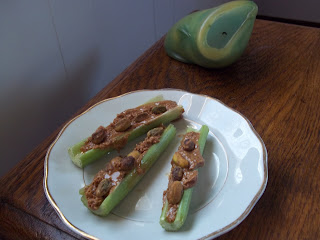 Directions
1. Spread the almond butter in the middle of the pieces of celery

2. Dot the pistachios on top of the almond butter.

Posted by chewingthefat at 5:14 PM