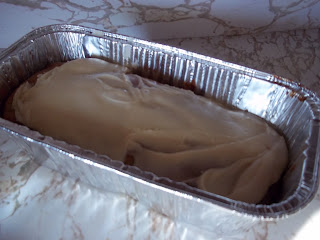 Last Sunday, in a morning yoga class, my eyes were transfixed upon the woman who put down her mat in front of me.  She was about 45, with unnaturally tanned skin, perfectly straight brown hair with strategically sparkly highlights, and a white Lululemon tank top and black Lululemon pants.  Just like some people put down a blanket or a strap to help them through the practice, she put down a stack of paper towels to use as tissues and immediately began coughing and sneezing.

When I was in college, when I was ill and went to class (which usually happened only once a semester), I'd often put my coat on the chair to my left and my backpack to the right and tell anyone who tried to take the chairs: "you don't want to sit next to me, I have the plague."

So I didn't feel bad looking around for another space in the room, but there was nowhere left free. Since the hurricane, the original branch of the studio I go to has been closed down.  My usual yoga studio is a lovely, airy space with a view of the ocean and located only two minutes from my house. The satellite studio is located in a nearby town which I guess some people would call 'quaint,' but which I think of as: 'retail space filled with stores selling everything you don't need at very high prices.'  There is a breakfast place that sells only fancy waffles and various hipster-type stores with overpriced fake vintage dresses and t-shirts nearby.  And I have to pay for parking. But the instructors are great, so I go.

So, I'm already annoyed about being there to some extent and then, for the rest of the class, the woman spends most of the time sneezing and coughing more than actually practicing, and I am in her direct line of snotty fire. Instead of counting breaths like you are supposed to, I count the tissues she manages to get through. The studio is so tiny and overheated it has a rather unwholesome, petri-dish quality to the atmosphere.

I thought little of the fact that later in the day I felt achy (although I haven't been sore after yoga for some time). The next day I woke up with what felt like something lodged in the right side of my throat and an unquenchable thirst that didn't go away. I wasn't congested, so I just sort of 'pushed myself' through my day, although I felt very odd.  The next day, my throat was somewhat better but my right nostril was totally clogged and I alternated between feeling feverish and having chills. I took some Tylenol, went about things as normally, but went to bed very, very early.  I didn't feel like I had a cold, though, because I wasn't that bunged up.

The next day, despite having slept longer than I had in months, I was sore in a different place of my throat and slightly more congested. I took the only other medication  I have in the house--I haven't been sick for over two years--which was some generic Sudafed. That drug never agrees with me, but by now I had to admit that I wasn't myself.  I actually felt okay during most of the day, but the early mornings and nights were pretty rough.  I also took the Sudafed since I didn't want to infect anyone else, since I was around other people and wanted to minimize the 'spew' factor. Sudafed dries me out horribly, leaving my nose reasonably clearer and turning my skin flaky and dry.

I thought I was getting better, but this morning I woke up incredibly nauseous with a pounding headache. Then I remembered how taking Sudafed caused me to throw up one of the few times in my life, skipped my next two doses and started to feel less seasick.

I'm no longer contagious according to the CDC, so soon I can get back to cooking and baking for others as well as myself soon--hopefully by Wednesday, to be on the safe side. This recipe I made in November, as a gift to give to a neighbor who helped me take down a precariously-fallen tree after the hurricane.

I've never gotten a severe flu before (nothing lasting more than three days) and I guess this wasn't 'severe' since I am still functioning, but I suppose I should consider getting a flu shot next year.  I've never been that sick, so I have never bothered to before.  But I suppose if I want to continue to pursue healthy activities like yoga in artificially warm, humid environments in the winter, I might want to...

And yes, I know it's bitterly ironic that someone who is as much of a nervous, anxious hypochondriac as myself didn't get a flu shot.

I apologize for the 'tin' but as I said, it was a gift and I didn't want to annoy my neighbor about returning a dish. 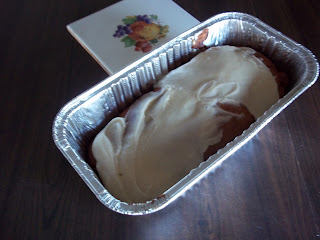 2. Brown the butter, melting it in a saucepan over low-to-medium heat until it begins to foam.  Remove and cool while assembling the other ingredients.

3. Toss the pears with the two tablespoons of white and brown sugars and the spices, leave to macerate.

5. Mix the eggs, milk, and applesauce. Add the cooled brown butter.  Incorporate the wet and dry mixtures.  Add in the pears.

6. Pour evenly into the two prepared loaf pans. Bake for approximately one hour (cooking time will depend upon level of moisture of the fruit to some degree).  Remove when a toothpick can be extracted clean from the cake and cool.

7. While cake is cooking make the icing.  Brown the 4 tablespoons of butter, remove from heat. Boil the water and set aside.  Add 1 cup of powdered sugar to the butter.  Whisk vanilla into the butter, followed by more of the sugar, then the boiling water, one teaspoon at a time, until icing is formed.  You may need to adjust the amount of water and sugar a bit (adding an extra tablespoon or two of the sugar or a teaspoon of the water) get the icing to the right, pourable consistency.
Posted by chewingthefat at 9:03 AM