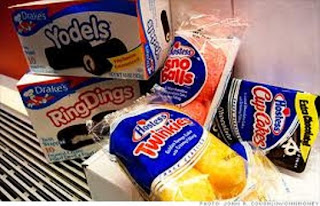 Like just about every American who was a child in the late 70s and early 80s, I have a Hostess memory.  I never understood the appeal of Twinkies any more than I understood the popularity of vanilla ice cream, Jolly Ranchers, or other super-sweet things, but I did love the Hostess chocolate products and pies.

My elementary school didn't have a cafeteria but whenever my class went on a field trip, I'd always use my lunch money to buy a pack of chocolate, cream-filled Hostess cupcakes, a bag of sour cream and onion potato chips and a soda (orange, grape-flavored or root beer if available).  Other kids would bring their sandwiches and buy a snack or buy pizza, but I went straight for the Hostess.

My mother was pretty sugar-phobic but when my parents were getting divorced and I was being bullied in school...I still remember how for at least one week straight she bought me Hostess pies, and included a pie a day in my lunch. I seriously remember nibbling at the thickest corner of the pasty, glorying in the peeling suntan texture of the pie crust and knowing with greater certainty than at any other moment in my life that my mother loved me and would do anything for me. And sometimes she'd allow me to have a pie as an after school snack, versus Green Giant creamed spinach, or celery and carrot sticks.

In college, I discovered Suzy Qs, HoHos, and Ding Dongs at the school convenience store and on really bad days, I'd skip eating real food entirely and just get a packet of them for dinner with some candy from the bulk bins.

I'm rather embarrassed to say, contrary to the stereotype, I don't drink or smoke dope, so my unhealthy eating habits were completely due to my own lack of self-control, not to any pharmacologically-induced cravings.

But even when I ate Hostess stuff fairly regularly, when given the choice between a really good piece of cake and a packaged snack cake, I would ALWAYS choose the regular cake from a good bakery.  Not because I was born with healthy appetites--I threw out the red apple my mother faithfully included in all the lunches she made for me FOR YEARS.  But bakery cake ALWAYS had more frosting. 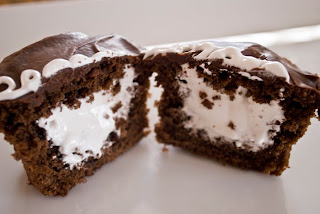 So it surprised me to see the outrage over the loss of Hostess-brand foods.  Haven't people's eating habits been changing?  Has all the stress on home baking and all the press given to baking your own food on television been for naught?  To quote one of my friends on Facebook: "most of the people who are complaining haven't eaten a Twinkie in twenty-five years."

Even people I know who regularly post articles like: "McDonald's and KFC are the evil slaughters of baby chickens" as part of their Facebook feed were mourning the loss of Fluffernutter sandwiches on Wonderbread.

But my all-time favorite response regarding The Death of Hostess was: "now what ethnic slur are people going to use to criticize Asian students for acting white?"

More seriously, aside from the tragic loss of jobs around the holiday season and perhaps hypocritically given my former passion for them, I can't get too broken up over the death of Twinkies.  They seem to belong to another era in my mind, when eating McDonald's was guilt-free and McD's was a happy, wholesome place to go after softball games; when Ragu tomato sauce was just as good as the real thing from scratch; when it was okay to watch the Smurfs and eat cereals that featured prizes at the bottom of the packages on weekends; and when I ordered all of my clothes and Christmas from the Sears catalog.

Not that I don't look back upon these things with fondness, sometimes, but I don't want to go back to DOING any of those things, any more than I want to substitute eating Ding-Dongs for a snack, versus a good slice of cheese.

However, given the escalating prices of Twinkies on eBay, I am clearly in a minority.

I think the appeal of Hostess nostalgia is that, as we grow increasingly fragmented as a nation in terms of the foods we use and crave--which is a product of greater ethnic diversity (a good thing) and also a growing class divide in the US (a bad thing)--we look back to the past when everyone seemed to be eating the same sort of food. Now, Hostess products (along with McDonald's, KFC, Carvel, and the other cherished brands of my childhood) have a kind of trashy, retro appeal, but when I was a kid EVERYONE ate that stuff, regardless of where a family was on the economic ladder. No kid brought in sushi in their lunchboxes or had sculpted gluten-free birthday cakes from Whole Foods. 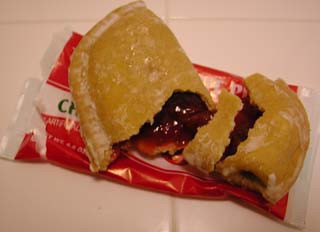 Of course, there were some partisan divides--I noticed as well on my Facebook feed there was a small minority of people who loved Tastykakes and regarded them as far superior to Hostess and an even smaller but equally vocal minority of Little Debbie proponents.

(Full disclosure: I was an equal-opportunity snack cake lover, I should note, but I liked Hostess the best because of the peelable frosting and greater abundance of fluffy cream filling, and Little Debbie was a bit too sweet, even for me).

But personally, I think the time for Hostess and the type of foods it makes is coming to an end.  It's possible someone will buy the brand and 'save' the Twinkie, but in ten or twenty years, the Twinkie will not have the cultural cache it has as a symbol today.

Your thoughts?
Posted by chewingthefat at 8:14 AM

Email ThisBlogThis!Share to TwitterShare to FacebookShare to Pinterest
Labels: rant