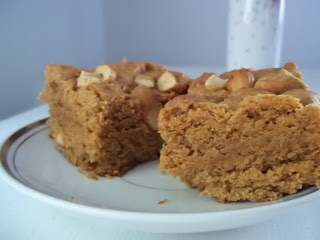 I used to think of blondies as the also-rans of the culinary world,  pale cousins of the brownie. Although I am not a pure chocoholic.  In fact, as a child I always demanded a balance between chocolate and other flavorings.  I liked cherry chocolate cakes rather than 'Death by Chocolate' concoctions.  I ordered vanilla soft serve with chocolate syrup or sprinkles. Later I learned to love vanilla ice cream swirled with peanut butter. I loved chocolate with many flavorings spanning from raspberry jelly to caramel, but never subscribed to the more-is-better chocolate philosophy of some of my peers. 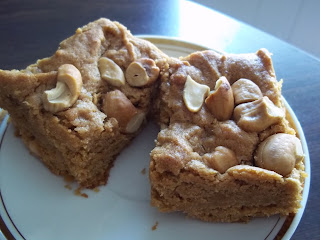 Regarding the 'second best' issue, I think because I am a brunette I have always rooted for the underdog. I colored in the hair of all of the blonde princesses in my storybooks with brown magic markers.  I cheered on Tom in the Tom and Jerry cartoons, even though I am fond of mice. I pitied the Trix rabbit.  I secretly gloried in the evil schemes of Azrael and Gargamel as they plotted against the Smurfs. I even preferred Blueberry Muffin, Strawberry Shortcake's also-ran BFF, and Skipper to Barbie.

However, there was a part of me that longed for blondeness.  I dyed my hair every color of the rainbow in college, except blonde, because I knew that the double-processing would turn my hair to straw. Yet I wondered if blondes really did have more fun.

Of course, now I realize that there are many blondes who are far from insipid.  Alice of Alice in Wonderland. Jane Tennison of Prime Suspect.  And I no longer have the patience to be secretly jealous of women based on their hair color. 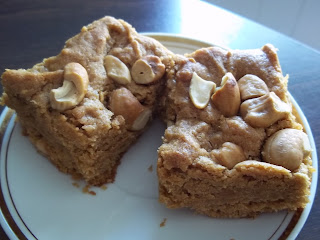 While it is unusual for blondes to be anything but Top Dogs in most spheres of life, blondies get short shrift in the culinary world.  So I've dressed up your standard blondies with some cashew butter and sea salt.  These smell fabulous and might even convert a few over to the idea that a good blondie can be as tasty as a good brownie. They are both salty and sweet.  More Jodi Foster than Marilyn Monroe in their blondness. 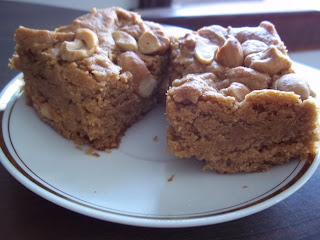 Posted by chewingthefat at 8:01 AM