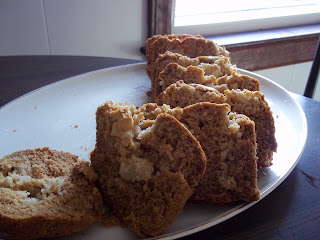 Yesterday was Yom Kippur, and while I don't celebrate it, I have many sins to atone for regarding apples.

When I was in grade school, my mother gave me a Red Delicious apple almost every day, and I faithfully tossed out that apple with a 'thunk' in the wastebasket.  Then I'd see if I had the required .25 to buy ice cream. This isn't a 'blame mom' post.  My attitude towards apples was quite peculiar.  I enjoyed drawing apples, and I liked apple appliqués on my clothing. I loved it when the Picture Lady profiled the artist Cezanne for our class and made my own clumsy imitations of his still lifes of apples, pears, and other fruits I refused to eat. My bookbag had a pocket that looked like an apple. I found the appearance of apples quaint and charming. I just wasn't that into fruit unless it was wrapped in dough and covered with sugar spackling.

Every apple dessert, whether pie or a doughnut, has a slightly different character depending on the personality of the cook.  Some are slightly dry, others have a lurid, gelatinous quality.  I loved all apple pastries--everything from the finest, from-scratch pies made at a local bakery to apple-filled powdered doughnuts to the deep-friend McDonald's hand pies.

The lack of enthusiasm for the fruit was partially physical--I had trouble chewing apples. And apples were said to be medicinal. "An apple a day keeps the doctor away." That alone is a turn-off. They are the fruit equivalent of the guy your mom really wants you to date.

Ironically, in my 20s, I would completely reverse my opinion on apples. For four straight years, I had the same breakfast: oatmeal, accompanied by a cut-up apple or two, softened to chunky applesauce texture in the microwave, topped with apple pie spice.

This cornbread is a kind of a bridge between the tricked-out Hostess incarnation of apple pie and the raw fruit itself. It uses unsweetened applesauce and cut-up chunks of uncooked apple,so it's on the low-sugar end of the Great Apple Continuum of baked goods.  It would be perfect to serve with chili, or with chunks of cheddar cheese to someone who likes fruit but isn't much of a dessert person.

Plus, it blends two classic fall American treats: apple pie and cornbread.  And you can't get more American than that, unless you use the loaf as a football before you eat it.

Although I've always found the phrase "as American as motherhood and apple pie" to be peculiar because there are so many  cultures that have apple pie in their repertoire, while many other American desserts (s'mores, hummingbird cake, red velvet cake, pumpkin pie) are much more parochial in character.  But then again, the phrase also suggests that only Americans have mothers. 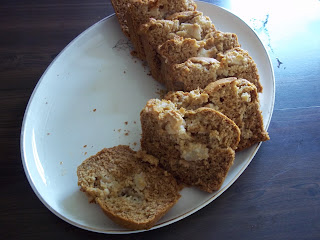 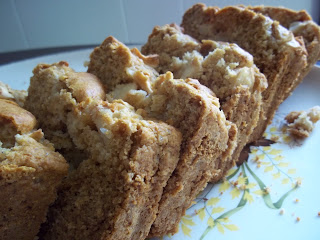 1. Preheat oven to 350F. Oil and/or line an 8X4 loaf pan with parchment.
2. Sift flour, cornmeal, baking soda and baking powder and spices together.
3. Mix honey, oil, milk, applesauce, and vanilla in another bowl.  Incorporate dry mixture into wet mixture.
4.  Pour 1/2 mixture into loaf pan, top with chopped apple. Pour the other 1/2 of the batter into the pan, then top with the rest of the fresh apple.
5. Bake for approximately 60-70 minutes until a toothpick can be extracted clean.  Make sure to 'test' in an area of the bread, not in a part with the apple!  Cool and serve. 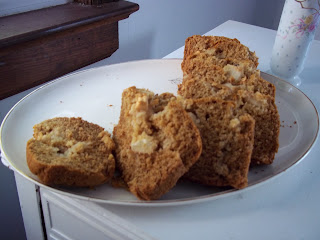 Posted by chewingthefat at 9:30 AM