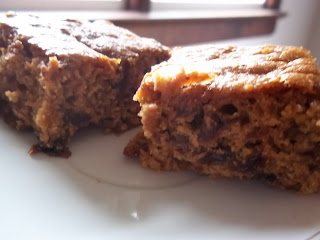 July 21st was my birthday, so I feel a bit remiss as a food blogger that I didn't post a birthday cake during the month of July. The truth is, I didn't have a party. While I love to bake for others, when it's just me, little else can top a candle stuck in the middle of a jar of some kind of nut butter or some very rich cheese.  So I didn't bake on my birthday.

The truth is, this was one of those 'hard birthdays,' for some reason.  No, my birthday didn't end in a zero. But for some reason, the great milestone birthdays have never bothered me as much.  Twelve was bad. Nineteen was an unpleasant number. So was twenty-six.

I have strange, subjective associations with numbers that I blame from reading too much and not doing enough real math. So turning some numbers bother me, because they seem to signify a break with the past.

I guess I feel...at twelve, you know you are no longer a winsome child and even wonder if you should still be reading children's books, while a ten-year-old can still be classified as charmingly precocious. A fifteen-year-old heroine was always youthful and fresh-faced, and anything could happen to her.  Sixteen is an exciting age for many heroines, too.  But by age nineteen, you know that you should start being responsible enough to do your laundry once a week and stop avoiding taking early morning classes because you don't want to get out of bed.

I talked to a woman who recently turned thirty and was upset because she said: "this is SO not where I want to be in my life."  But once you creep away from thirty, it no longer your failure to become a bright young talent that haunts you and more of a sense that it's all going too fast.

I'm very fortunate to have found certain pursuits in my life like riding, running, and yoga, in which I can still be a student and hopefully see myself 'moving forward' in a positive way, rather than always wanting to hold time back. I'm fitter and more attractive than I was in my twenties and as for wiser, I really don't believe people ever grow wise.  The 'truth' of a ten-year-old, that it's catastrophic when your teacher hates you and you have to wear a sweater over your Halloween costume is no less true than the truth of a thirty-two-year-old who is crestfallen she hasn't written The Great American Novel yet.

However, I have noticed this year that, in terms of pushing time forward stores are ALREADY putting back-to-school stuff on display.  Even though I loved shopping for back-to-school supplies (some years it was my favorite part of the entire school year) I know I would have been devastated at the sight--back-to-school around the time of my BIRTHDAY?  July, I thought, was my month...and I only grudgingly admitted, the birthday of the country. 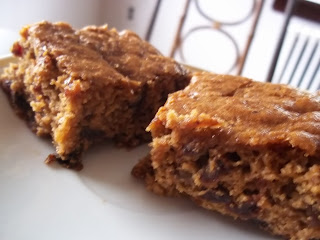 However, given the back-to-school rush, I thought I would share this great lunchbox or after-school treat with all of you.  I made them for a vegan friend of mine, so I used flaxseed rather than an egg, but you could also use an egg to whip them up quickly.  They are low in fat and are homey without being decadent. Make them for your kid's lunchbox or your own lunchbox and screw those stupid school supply lists they send home and buy your kid the glittery erasers and the notebook with the pony on it, rather than plain ones you're supposed to buy.  You are only young once. 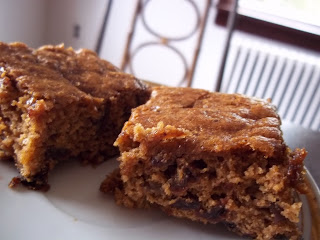 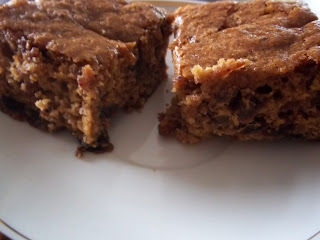 4. Incorporate wet and dry mixtures.  Pour into pan. Bake for 45-50 minutes until a toothpick can be extracted clean.
Posted by chewingthefat at 1:47 PM