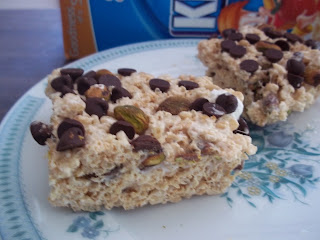 It didn't get much better in the 80s than finding a candy bar or a plastic treasure chest or a car in your cereal while doing the maze or the crossword puzzle on the back of the box.


If there were cartoons playing in the background and I didn't have to go to school, I could linger a long time, watching the milk turn colors and waiting for the mailman to deliver Dyamite and Penny Power before I got out of my pink, green, and white flower-dotted pjs.

However, I always had one great cereal regret: I never got to make Rice Krispie treats.  Oh, I watched my friends make them, and ate them as snacks at Brownies.  But for some reason, my mother did not allow me to make them at home.  I think it seemed too much like 'making dessert' in a serious fashion and she would only go so far as allowing cookie and cake mixes.  Or she was afraid if I had cereal with pure marshmallows, she'd never get me to drink milk again and to eat the marginally healthier brown bits in my Lucky Charms.

On the rare occasion I've sampled processed food I used to consume frequently during that decade, I've often thought: 'you know, this doesn't taste as good as I remembered. Did they change the recipe or is it just me?'

While my taste buds may have changed, at least when it comes to Rice Krispie treats, blogger Anna Ginsberg at Cookie Madness stumbled upon a fascinating fact...Kellogg's DID change the recipe! According to an old recipe pamphlet from the 80s, the original treats were made with four tablespoons of butter and only five cups of cereal, versus three tablespoons of butter and six cups of cereal in the current version.

So, if you have been saying: "why don't my Rice Krispie treats have that awesome, ooey-gooey moist quality I associate with the Rice Krispie treats of my youth," that is why.  The clever people at Kellogg found a way to get you to use up more cereal.

The company must have realized that if everyone makes Rice Krispie treats with one cup of extra cereal, the company can make...well, lots more money!  (Obviously, that subscription to Penny Power was wasted).

Anna has some other wonderful tips that have helped me ensure my Rice Krispie treats have that 'school bake sale on steroids' quality that we all covet. Brown the butter first to give it a nice, nutty texture.  Add a pinch of salt if using unsalted butter.  And use an 8-inch square pan so you can cut nice, high squares, rather than anemic, snack cake-sized rectangles, as will be yielded by a 9X11 pan.

Even kids who didn't grow up in the 1980s enjoying Chocolate Frosted Sugar Bombs for breakfast and who never sifted through a box of Cookie Crisp looking for the plastic toy will like these.  However, in deference to my generation's maturing palate, this is a 'grown up' version of Rice Krispie treats, with salted pistachios and dark chocolate chips to counteract the sweetness of the marshmallows. 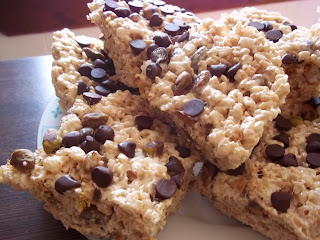 After all, you can't recapture the past.  The current box of Rice Krispies has no toy inside.  Not even a puzzle on the back. 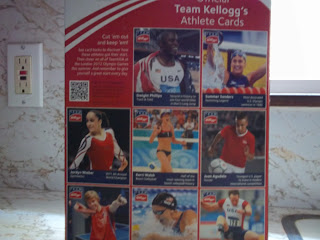 Cut out the pictures of future Olympic athletes ?  That's the prize?  Are you joking Kellogg? 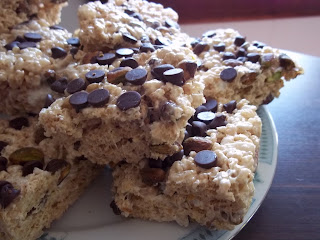 1. Line a 8-inch square pan with parchment, leaving enough to overlap on the sides.

2. Butter a large saucepan to prevent burning. Brown butter on reduced heat.  Slowly add in the marshmallows, reducing the heat to low.  When melted, remove from heat and stir in cereal and the 1/2 cup of pistachios.(If you don't have a large enough pot, you can also pour the butter-marshmallow mixture into the cereal, but be aware that it will be sticky).

3. Mix until all of the cereal is coated.  Press into the prepared pan.  With another sheet of parchment, press onto the surface of the treats to flatten.  Top with the nuts and chips.  Press firmly with the parchment again.

4. Cool, remove from the pan and slice into nine squares.
Posted by chewingthefat at 4:42 PM