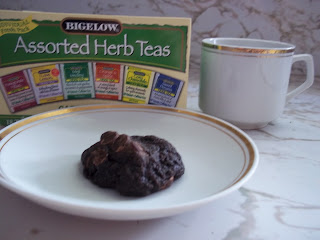 You know those awkward sorts of moments when you realize--hey, I went to elementary school with that person?  That person who was accused of...well, it is really not important. Suffice it to say that someone I knew as a child was recently accused of a terrible crime in the press. Drugs and guns were involved. You probably haven't read the story, since it's a relatively minor back-of-the-tabloid type of story.  But still.

My memories of the girl are mostly vague and visual.  I remember a sleepy-eyed, heavy-lipped, pale, freckled girl with long, dark hair.  Unlike most of us who were fashion victims with neon sweatshirts, crunchy sprayed curls, and nine million plastic bracelets on our wrists during the 80s, she was always more tastefully dressed in jewel-colored cowl-necked sweaters and black leggings.  She wore her hair straight. She had beautiful collar bones. She was not expensively dressed, but put together in a way that made you think, in retrospect, "hey, the 80s could come back as a fashion decade." She never got a bad perm.  She was nice to everyone and I don't remember her ever participating in the evil, cliquish politics of prepubescent girlhood.

Yes, she was nice.  I remember very little specific about that 'niceness,' though. I remember her mother used to work for a local university, and my mother said she was jealous because she said that meant your kids could go to college there for free but she liked her mother very much all the same. She was the only girl to get skim milk in kindergarten, when we ordered our little containers of warm milk that would sit for hours on a shelf until we consumed them through tiny straws.  Her mother used to send her with a salad to lunch in fifth grade with the dressing in a separate container and bacon bits in another as well as normal-type food. The girl liked salad as well as the junk food the rest of us inhaled. I thought that was cool, although not cool enough to ask for a salad myself, only the bacon bits to put on the few veggies I was forced to consume at home.

She may have come to one of my early birthday parties.  I am pretty sure she liked the color purple. She was good at math.  She wore a beret at one point, a raspberry-colored one like the Prince song, I think. Oh, and I also sort of remember that we once did a craft in second grade involving poking an orange with a needle and sticking cloves into the flesh, and some of the boys thought it would be witty to painlessly stick the needles beneath their fingers, walk around and freak the other kids out by making monster noises, and she was the only girl who would give that a try.  But she stopped when the teacher noticed what they were doing.

Of these scattered memories, the only thing that is perhaps of any significance is that she was nice.

In fiction, everything is foreshadowing and there are no insignificant details.  Someone kicks a dog in the first page of a novel and turns out to be a villain in the end.  Or, there is a deliberate reversal of your expectations and the poignant pluckiness of the main character seems tragic, foolish, and fragile.

In life, we read back into anecdotes when we hear about what sounds like a fitting end to a narrative--the gain and loss of one's reputation--but in my memories, there is none of that in my memories.  Just a nice, pretty little girl with a kind of precocious sophistication and charm, who was never mean, and always had good things to say about other people.

I have no intelligent comments about the accusations--I haven't had a conversation with her since I could get a cheap ticket to go to the movies, based on my age--I just feel a sense of sadness, regardless of how it plays out. 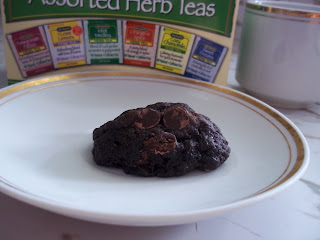 On a more positive note, these cookies have something unexpected in them.  But I am giving you a hint in the picture, like hanging a gun on the wall that will go off in the last act. 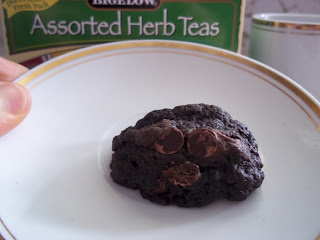 These are mint chocolate cookies...seasoned with mint tea.  Yes, mint tea. There are surprises everywhere--good and bad.

I found the recipe through NPR.   I made them with only a few minor modifications. 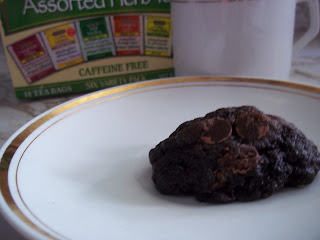 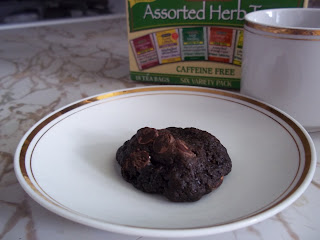 Posted by chewingthefat at 8:44 AM