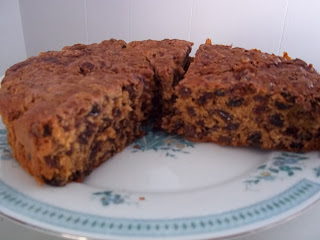 I once heard it said that if you were to write an Irish cookbook, it would have two pages: a potato on one page and a tall glass of Guinness on the other.

Obviously, that's not fair, especially in the New Ireland, given how many wonderful chefs that have been produced by the country, as well as all of the butter, milk, and meat products to come from the very fertile farming region.

However, in the case of my own Irish family, I have to say that the stereotype rings pretty true. My Irish great-grandmother was remembered for her frugality. She was able to make a rasher of bacon stretch to season an entire pot of cabbage. She lived until age ninety and had a pretty sparse diet.  Lots of vegetables, not a lot of meat, not many sweets. Although she did always keep a coffee can of solidified bacon drippings in the kitchen. 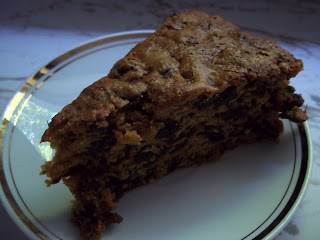 When my maternal grandmother was healthy, she loved to entertain, but that usually meant presenting a 'smorgasbord' of cheeses, dried fruits, and cold cuts.  They were very good cheeses, dried fruits and cold cuts, but no cooking was involved.  My grandmother was the type of person who would very proudly defrost a Sara Lee cake right in front of you for dessert, or offer you candy or Breyer's ice cream. Or mention your weight. Or all three.

Incidentally: small rant.  For people who don't like to cook, I never understand why more of them don't 'smorgasborg' when entertaining.  No one recounts with horror being confronted with some nice cheese, cold cuts, and cut-up vegetables for a meal.  Everyone remembers the horrible tuna fish casserole with shredded wheat or the half-raw chicken, presented with the prideful words: "I don't like to cook, and even if it isn't good, at least it was done quickly.'

On the rare occasion when my grandmother did cook, she revealed her Irish roots. I remember being slightly terrified of 'shepherd's pie'--which to my eyes was a strangely bland yet horrid gloppy mass of stewed chicken, topped with mashed potatoes.  Or she'd cook pot roast with carrots and plain, bland stewed red bliss potatoes.  I wouldn't touch such stuff and my mother would glare at me. Peanut butter and jelly sandwiches were made for shepherd's pie days.  When we all went out to Perkins together, we were so much happier.

I never heard of Irish freckle bread until I read about it on the Internet.  It's easy to see how this quick bread originated--it makes use of leftover tea, and my great-grandmother would be proud of this refusal to waste anything.

Like all folk recipes, there are many different versions out there, including several that use yeast. The only requirement is that the bread contains dried fruit to 'freckle' the bread.

This is my interpretation. I brewed some orange herbal tea, to give the bread some additional notes of flavor, and added a cinnamon sugar topping. I also, in deference to the spirit of frugality that is at the heart of the bread, only used raisins, given that the King Arthur version with dates, currants, prunes, as well as raisins and would have made this an incredibly expensive and therefore decidedly un-Irish bread in spirit.

It is worth noting that a similar technique of seeping dried fruit in water to add moisture to a bread is also used in date nut bread. 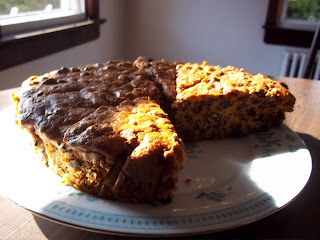 Posted by chewingthefat at 8:17 AM