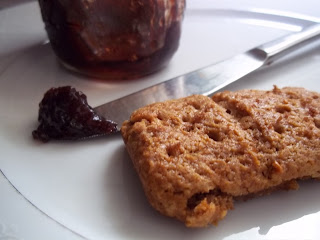 There are so many varieties of graham cracker recipes on the web. Some involve rolling out the dough and using a pizza or cookie cutter to make squares.  The recipe I selected is more of an 'icebox' technique, in which the dough is patted out into rectangles, chilled, sliced and baked.  So if you're really anal and get upset if your graham crackers don't look precise and geometric, this recipe probably isn't for you.  However, if you like sturdy, crunchy cookies that don't crumble when you turn them into s'mores or slather them with peanut butter and jelly, this incarnation of the popular snack cookie from 101 Cookbooks might please you.

The Fourth of July is immanent, and while making an apple pie might seem more logical, it is one of those Linda Richman paradoxes that "nothing is as American as apple pie, yet apple pie is not American--discuss."

I would say, instead, nothing is more American than graham crackers. The pious New Englander Sylvester Graham was a devout vegetarian and health food nut and developed the graham cracker as part of his austere dietary regime which was supposed to promote the health of the body and quell all sexual urges.  Graham was particularly obsessed with eradicating the scourges of meat, sweets, heavily spiced foods, and masturbation.  Needless to say, he probably wouldn't be the first person you'd want cater your barbeque, although you at least wouldn't have to worry what he'd do in the kitchen if you complained about the food.

However, over the years, the unsweetened graham cracker of his original conception (which probably tasted like packing material) was transformed through the wonder of industrial food processing and marketing into a quaint, sweet childhood staple.

I never asked for them, anyway--they seemed to be associated with warm apple juice and Jell-O, the kinds of 'good for you but not good for you' kid snacks foisted upon me when you I really wanted a cupcake or a doughnut.  Later in life, I grew more fond of them, given that their quasi-health food status made it okay to eat them as a 'sandwich' with butter and honey or peanut butter and jelly.

As for s'mores--I have had precious few in my life.  I've never been a big marshmallow fan, and during my one trip to Girl Scout camp, I remember eating the Hershey's chocolate bars and incinerating the marshmallows on purpose until black and crunchy.

I still need to perfect my technique with making graham crackers (I apologize for the rustic appearance of the cookies, as it was my first venture).  I need to make more. So I think I will give s'mores another try. Have slather some peanut butter and on these and raise your glass of milk to Sylvester Graham, a true American original.

From 101 Cookbooks, with some slight adaptations


Directions'
1. Sift flour, sugar, baking soda, and salt in a bowl.  Add butter. Combine honey, milk, and vanilla in separate bowl and incorporate into the dry.  When it forms a dough ball, transfer onto a floured work surface and pat into a large, square rectangle on a floured table.  Chill 2 hours to overnight.

2.  Split chilled dough into two long rectangles and keep patting out until it forms two long, skinny rectangles.  If your dough was as sticky as mine, this may take awhile. 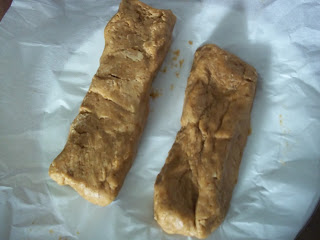 3.  Chill again if necessary before slicing into cookies. Score the cookies in half and prick the halves with five pinpoints with a toothpick.  Kind of like dominoes. 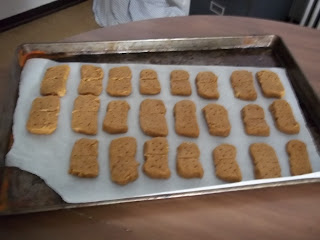 4. Sprinkle with cinnamon-sugar topping (there will be some left over).  Chill another 30-45 minutes before popping into a 350F preheated oven. 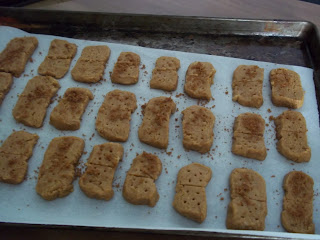 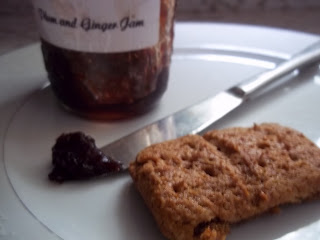 Posted by chewingthefat at 9:10 PM