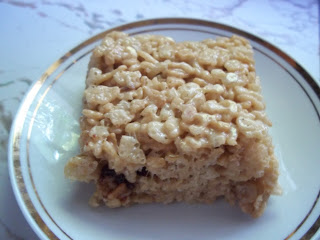 I read far too many food blogs and nutrition-oriented material on the web and I'm often reminded of George Carlin's monologue about driving. The one in which he says that there is no one who is EVER going at the 'correct'  speed--except you. Everyone going faster than you is a maniac.  Everyone going slower than you is an idiot.

Similarly with food--everyone who prides him or herself on being a home cook seems to have certain limits that seem obvious to everyone but themselves as to what constitutes 'home-cooked food.'

For some, cake mix is verboten but it's okay to use white hamburger buns so long as you make the tuna salad and the tomato soup.  Packaged cookies=one step away from Sandra Lee, unless they are pulverized into a cheesecake crust, in which all of their processed qualities mysteriously leach out into the food processor and make using the cookies okay. (Yes, I recently made my own, but I didn't make my own marshmallows for the s'mores which some of them metamorphosized into and I know some people who wouldn't dream of using *gasp* store-bought marshmallows).

In food, the analogy is as follows....

Everyone who eats more packaged food than you do and take-out=idiot.

Everyone who insists on their food to be from scratch/healthy/of a certain expensive brand=maniac.

While I'm a pretty neurotically healthy eater I admit I have my own rules, too.  I would never ingest a Chicken McNugget--ever--while some foodie friends of mine take pride in their ability to 'appreciate' the fries at McDonald's.  However, I know other foodies think I should burn my digital camera because I love picking up an organic rotisserie chicken for dinner. For me, that is okay because it's just plain chicken, with no additives, even if I didn't turn on the oven.

So, my particular brand of Carlinesque thinking is that when I see people getting bad fast food or buying cheap white bread I think 'idiot.'  But when I'm at my yoga studio and someone tries to explain to me how they are 'vegan and 75 percent raw and how we are NATURALLY made to eat all raw foods' (despite the fact that eating raw takes so much expensive equipment), well my eyes start to glaze over and I start to think 'maniac.'

So perhaps I am the idiot (although the reason you think I am likely depends upon your own food barometer of normalcy).

To get away from all of this nonsense sometimes you just need to make a batch of Rice Krispie Treats and call it an evening.

But I have a deep, dark confession that I was hesitant to air in public until this time.

There, I said it! Of course, I adore peanut butter and have sung its praises on many occasions.  But cashew butter for me is the nut butter that is truly in the territory of 'I could eat the entire jar over the course of the entire day with a spoon.'  I know it sounds very food snobbish, particularly since I buy an organic brand of said nut butter.

Eat it straight up first, but then use it to make some wonderful, salty not-too-sweet Cashew Krispies to perfectly balance your opposing foodie tendencies.

Of course, you can also make the Krispie treats (or Squares, if you are Canadian) with peanut butter.  Even almond butter.  But that would be a little crazy...

1. Line a 8-inch square pan with parchment, leaving enough to overlap on the sides.

2. Butter a large saucepan to prevent burning. Brown butter on reduced heat. Add cashew butter.  Slowly add in the marshmallows, reducing the heat to low.  When melted, remove from heat and stir in cereal.  Mixture will be VERY sticky.

3. Mix until all of the cereal is coated.  Press half of mixture into the prepared pan.  With another sheet of parchment, press onto the surface of the treats to flatten.  Top with the jam. Top with the additional cereal mixture. Press firmly with the parchment again.

4. Cool, remove from the pan and slice into nine squares.


Posted by chewingthefat at 7:25 PM