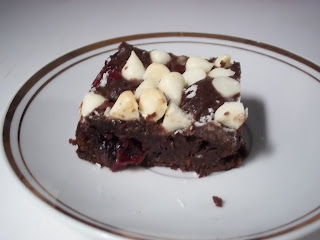 As a kid, I always judged a restaurant by the quality of its dessert cart.

I lived for the dessert carts that had a wild variety of pastries--French and German, mostly. For children, the saying 'we eat with our eyes first' is very true. Being presented with a dessert cart and told to pick one pastry was like being turned loose in Child World or Toys-R-Us or a museum gift shop in the early 80s with a five-dollar bill. I loved the process of selecting just the right item. It never occurred to me to want more but nor did it make me feel guilty about the frenzied delight I took in consuming what I was allowed to have.

I learned that cakes with heavy chocolate ganaches were a bit too heavy and one-dimensional for my palate. Conversely, the fluffy strawberry shortcakes with whipped cream that little girls were supposed to adore were too sweet and also bored my tastebuds. Desserts with lots of walnuts and hazelnuts were too bitter for me at the time. I learned to avoid German chocolate cake, despite its seductive caramel topping, because of the insidious coconut that lay beneath its innocent surface. But certain desserts had just the right balance of chocolate, vanilla, and creaminess. I loved eclairs, for example, and vanilla cakes with chocolate frosting or vice versa.  But my all-time favorite was Black Forest Cake.

My mother's and my favorite restaurant had a Black Forest cake that consisted of three layers of very rich, dense, dark chocolate cake.  The inner layers were spread with chocolate icing and real, plum-like cherries.  Sometimes I'd find a pit in one of the cherries, so I knew the cake was made truly from scratch. The side layers and top were covered in light chocolate frosting that tasted like chocolate mousse. The sides were festooned with dark chocolate shavings. The top of the cake was slathered in more cherry filling and bits of semisweet chocolate.

Eating a single slice took me at least a half an hour, to savor every last bite. First, I would eat the bottom layer, then the center layers, and save the frosting from the sides and top for last.

I talk to parents today and some have children who do not like sweets. I respect and understand that.  Others, however, have children who disdain good desserts and will take a Chips Ahoy or an Oreo cookie over a slice of homemade cake every day.   These children do not understand dessert carts.  I pity and somehow mistrust them.

Later, I tried Black Forest cake at another restaurant.  Eager with anticipation, I expected what had come to be known as 'my special cake.'

A cake with sweet, very light brown German chocolate was presented to me.  The cake was frosted in whipped cream--WHIPPED CREAM--which I loathed. Its sides were covered with sliced untoasted almonds on the side, which I did not like. And it was topped, not with real cherries, but maraschino cherries, like a Shirley Temple had barfed on my Black Forest cake. I took a bite and blanched.  It had alcohol in it, and I don't even like spirits as an adult, and to a child that bite was like eating a slice of solid cough medicine.

I learned at that moment how my 'Black Forest' was nothing like the classic Black Forest cake, but something very particular to that very special restaurant.

The experience taught me that there are no 'truths,' only interpretations, long before I took literature classes on French deconstructionism.

I have considered replicating My Cake.  But then, if I presented you with a very dark chocolate cake embedded with real cherries and chocolate mousse frosting you would say: "That is not Black Forest cake."

But given that Black Forest has come to become a synonym for anything with cherries and chocolate, I present you with these brownies, which don't even make a pretense of being authentic. The brownie recipe (one of my favorites and so easy) was adapted from here, and rather than use cherry pie filling (a pretty typical 'Black Forest' ingredient), I decided to use dried cherries. You could marinate the cherries with kirsch for a more traditional flavor and top them with whipped cream.  But use real whipped cream, please! 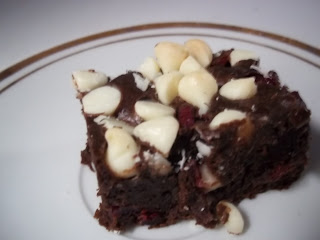 2. Melt chocolate and butter over a double boiler.  Let cool, then incorporate the cocoa, sugar, vanilla, and eggs.

4. Bake for 25-28 minutes.  Cool for at least one hour before slicing. I refrigerated the brownies overnight before cutting.

Posted by chewingthefat at 9:15 AM