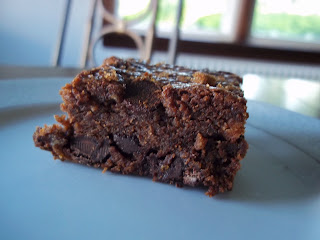 I'm immersing myself in Mexican brownies. Well, if two recipes within two days qualifies as immersion. The recipe for these brownies come courtesy of one of my favorite bloggers, Anna of Cookie Madness.

I don't recall ever eating Tex-Mex or Mexican-American food at home. The first time I ever had tacos was at the birthday pool party of a friend of mine in grammar school. Back then, everyone (and I do mean everyone) served either pizza or burgers and hot dogs at parties.  Instead, Carla served ground, simmering taco meat complete with a 'toppings bar.'  I was blown away by the fact that I could actually 'make my meal' by slipping the ground beef crumbles into the crispy yellow shell and top it with as much shredded cheese as I liked.

When I asked to go to Casa Comida, the local Mexican 'fine dining' restaurant in my area as a result of my mind-blowing Goya oh, boya experience, my mother obliged, ordered a plain steak and averted her eyes to gaze at the pinatas hanging on the ceiling as I ordered burritos.

She also agreed to dine 'in Mexico' (as they say at Epcot Center) when we visited Disney World when I was twelve but that was because I had strategically worn her down. I had visions of chicken enchiladas draped in Monterey Jack dancing in my head as I made her traipse through ALL the other nations in the 90F temperatures with 100 percent humidity that didn't bother me.


I know that I'm turning into my mother because I'm 'over' the type of Mexican-American cuisine that is really more like glorified Sloppy Joes than the Frontera Grill.  Truthfully, I can't stomach that much tomato-based acidity, fat, and spice in one fell swoop any more, much less jump into the pool afterward and top it all off with some Carvel ice cream cake.

However, I often find that a little bit of chili powder goes a long way to adding complexity of flavor to a dish. 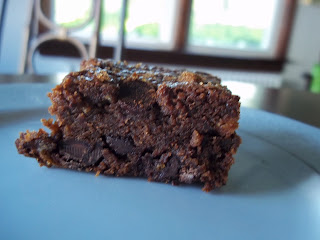 Anna is from Texas, so her 'Tex-Mex' brownies are the 'real deal.'  Spicy and cinnamon-y.

No pinatas were harmed during the making of this recipe.

Here is a link to her original creation.

I made a few small changes.  I used semisweet chocolate rather than unsweetened chocolate squares and semisweet chips rather than bittersweet chocolate chips, so I reduced the sugar overall. I used some dark brown sugar as well as granulated sugar.  I increased the cinnamon a teeny bit, and left out the nutmeg and pecans. These changes were based more on what I had on hand so please check out the original, check your pantry for what ingredient combo works for you, and start baking.  Arriba!  Er, or something like that.

1. Preheat oven to 375F.  Line an 8X8 pan with foil, enough so that the sides are overlapping.

2. Sift flour, spices, and salt together.

3. Melt butter and chocolate over a double boiler, remove to cool.  Add coffee.

4. Incorporate eggs, sugar, and vanilla in another bowl.  Add to butter-chocolate mixture.  Slowly fold in flour-spice mixture, stirring just enough so there are no streaks of flour.

Note: Rather than bringing all the ingredients to room temperature, I kept the chips in the refrigerator so they didn't 'melt' fully when baking. 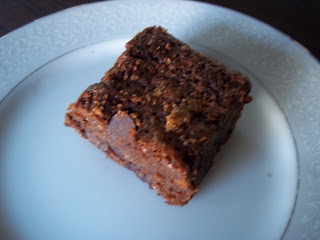 8. Cool and refrigerate for 1-2 hours before cutting.


Note: Anna suggested baking for 30 minutes and then using a 'ice-water bath' for the pan to prevent the brownies from over-baking due to residual heat.  I didn't use the ice-water bath  (I made these late at night and my energy had faded).  When I make them again, I think I will probably just take them out a few minutes earlier, since the ends were a bit crispy at the corners, as you can see from the photo below.  However, some people like crispy brownie ends!  Still, depending on your oven, if you don't feel like performing the extra step, I'd keep an eye on them after 25 minutes or so. 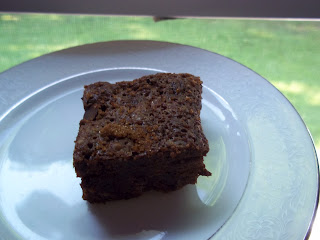 Posted by chewingthefat at 8:26 AM