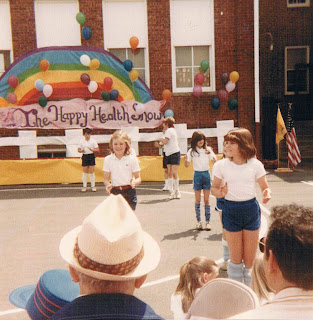 Upon viewing this photographs from my youth, you are probably tempted to say:  "Why Mary, you have been deceiving us! We thought you were a woman in your thirties who grew up during the early 80s.  Based upon these photographs, you clearly attended a Pioneer Camp in the Soviet Union during the 1950s, which means you must be an older Russian woman."  Although that would explain the melancholia, you would be in error. Despite the uniforms with shorts and the aggressively cheery demeanor, note the American flag in the background and the non-Cyrillic lettering.


For my elementary school's end-of-year ceremony, under the tutelage of the insane, crooked-back, Richard III-like power of the school's music teacher, we offered a combination display of physical prowess along with a music 'extravaganza' outside rather than your standard chorus-and-awards show.

The show began, I kid you not, with all of the grades tooting patriotic songs on plastic white and red flutophones.  Every student had to wear white polo shirts and a pair of shorts, color-coordinated with the rest of the grade.  I knew the universe hated me because they rotated the colors between the grades, and I  was invariably in the class that got boring blue, never red or green.   We'd honk on our flutophones, walking out in in various geometric formations, then we would take our seats outside near the playground. I'd chew on mine, waiting in anticipation for what was to come next.

There were xylophones set up behind the dodge ball circle (yes, not only did we play dodge ball, which was a healthy outdoor activity rather than a lawsuit -waiting-to-happen in the 80s; we had a permanent asphalt area dedicated to the sport).  One grade would then perform some sort of physical activity, while another grade played the bells in the background. 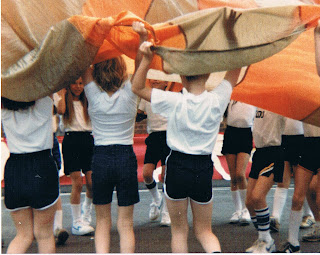 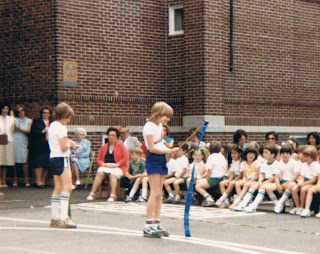 The physical activities that were performed were not dances, nor were they sports.  Well, I guess they were some sort of rhythmic gymnastics: we performed with weighted balls, streamers, and a large parachute that we would poof out in the air and poof back.  All to the 'ding-ding-ding' of the little xylophones.

But wait!  The entertainment did not end there!  After we had engaged in this 'Orwell's 1984 meets Flashdance' show-stopper, we would then sit once again and sing to the music teacher's piano (moved outside for the occasion).  Our songs were written BY THE MUSIC TEACHER HERSELF.

Mrs. M enjoyed making up fitness-inspired lyrics to classical music, and to this day I remember how she took the theme song from Chariots of Fire, and created this ditty:

I finally saw the film about the British track stars of the first modern Olympics as an adolescent. At the climax, the main runner, a devout Christian, confronts the Olympic officials and says that no, he undertook his running career as a tribute to God and he WILL NOT run on the Sabbath, even if it means that he will not win a medal because God gave him the talent, and if God wills him not to race, that is God's will...and during that moment, this popped my head:

After the school show, the parents and kids would go to the local McDonald's.  It was always a great scene because the ENTIRE school would descend upon McDonald's.  And we saw NO irony in this, whatsoever.

People talk about the 80s sometimes, and they characterize the diet and fitness trends as spa cuisine and step aerobics.  There was no 'spa cuisine' in my suburb.  To me, uniquely 80s cuisine means Fruit Roll-Ups, Pizza-Flavored Combos, Cool Ranch Doritos, Hi-C and Capri Sun squeeze bottles, School House Rock-inspired orange juice popsicles and of course Chicken McNuggets.  Fitness trends were comprised of leg warmers, dodge ball, kickball, and duck-duck goose and my mother doing the Jane Fonda Workout.  And streamers and parachutes to Chariots of Fire.

Poultry, for some reason, I think of as a very 80s thing.  It was considered super-healthy, versus beef, which was why pork then advertised itself as 'the other white meat.'

We never ate chicken burgers or turkey burgers at my house, but I was aware of them.  When I saw antibiotic-free ground chicken at my local Wegmans, I decided to give it a try, even though I feared it might be dry.  However, although it doesn't taste like a beef burger, amped up with moisture-rich spinach and my favorite spice blend, I really enjoyed the final result.  It is 'its own thing.'  Just like the theme of the early 80s kids shows was 'be yourself.' In color-coordinated legwarmers.

Mix chicken, spinach and spices in a bowl, form 4-6 patties. Heat skillet.  Cook approximately 5-6 minutes for each side on medium heat, until thoroughly cooked and no pink remains. Serve on a sesame seed bun. For a healthier option, use a whole wheat hamburger bun, or eschew a bun entirely. Garnish with fresh spinach leaves and top with mayonnaise, followed by Gorgonzola cheese. OR simply top with mustard.
Posted by chewingthefat at 6:40 PM