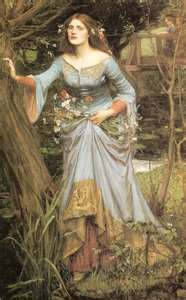 I loved Ophelia: forty thousand brothers
Could not, with all their quantity of love,
Make up my sum. What wilt thou do for her?
--Hamlet, V.1


I'm sorry, Hamlet, but I loved Ophelia. Or rather, I identified with her in high school, more so than any of Shakespeare's other heroines.

I couldn't believe a man would ever die for the love of me, like Romeo did for Juliet.  And although I liked Lady Macbeth's breast-beating and hand-wringing I never really identified with her ambition.  I wouldn't ask a man to kill so I could have power by proxy. I could also never understand how surprised and guilty she was after killing Duncan.  I identified more with Macbeth--reluctant, afraid of his dark impulses, but wise enough to comprehend that once you become a monster there is no going back.

But Ophelia, I 'got,' instinctively.  Depressive, neurotic, insecure yet defiant.  Desperately in love with a tormented man she barely knew because she identified with him and he could express aloud all of the pain and inadequacy she felt inside. My other friends who dug Shakespeare called her a wimp.  A wimp to suffer within because of the injustices of the world?  If that was the case, then Hamlet was a wimp, not the 'most intelligent character ever created' as he is often called.

Unfortunately, given the limited imaginations of casting directors, I was never blonde and willowy enough to embody Ophelia.  Instead, I played her again and again in my head, reading Ophelia's mad scene for the umpteenth time in my room.  Didn't people understand the PROFOUND TRUTHS she was trying to communicate when she was singing obscene songs, throwing flowers, and quoting strangely prophetic bits of folk wisdom? They say the owl was a baker's/ daughter. Lord, we know what we are, but know not/what we may be.


In short, Ophelia was Gaga before Gaga was a word. 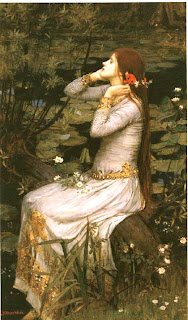 Ophelia's rosemary, pansies, fennel, columbines, and rue which she uses to 'speak' to others in her elaborate pageant of madness aren't so unusual I suppose--there is a reason that women and their potential to engage in alchemy with spices have always been feared--in sorcery and in cooking, as well as in Ophelia's mad scene.

With the cook's eye, looking at Ophelia's herbs and flowers, I used to wonder why she neglected thyme, the natural mate of rosemary.  Thyme would seem very appropriate, given that the Egyptians used it for embalming and thyme was often used to line coffins, to give the dead person courage in the next life.  But it is the spice of courage--fair maidens would give it to knights before battle--and Ophelia had no knight to whom she could give thyme, no one who loved and trusted her completely, and to go to her own death clutching it would be very bitter and false indeed. 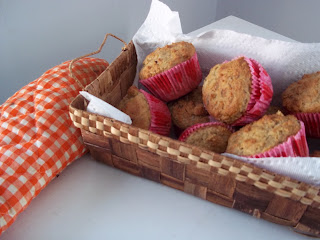 In my own mad desire to throw something together with what was in my baking storage area, I noticed that I still had a bag of rye flour I used for an earlier quick bread, and a great deal of fresh thyme--more than I could use, even if I roasted a chicken a night for a month.  The savory muffin that was the result worked out so well,and got such rave reviews, I am posting it.  The flavor of the rye and cornmeal is accented with the thyme.  The muffins are particularly nice fresh from the oven, but they can also be toasted and buttered.  I think they would make a fantastic stuffing for mushrooms, chicken, or turkey as well. If you really want to go crazy. 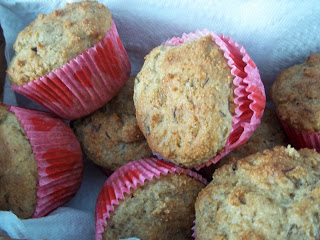 Directions
1. Preheat oven to 350F.  Line 8-12 muffin tins.
2. Sift the cornmeal, rye flour, brown sugar, baking powder, baking soda, and salt together.
3. Combine the yogurt, water, oil, and egg.
4. Spoon the dry mixture into the wet, fold in the thyme.
5. Pour into the muffin tins.  Bake for approximately 20-22 minutes, until a toothpick can be extracted clean.  Cool for at least 10 minutes before eating. 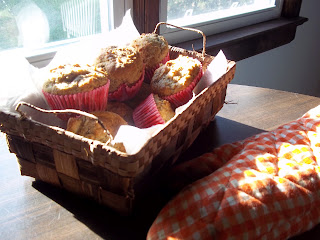 Posted by chewingthefat at 4:37 PM