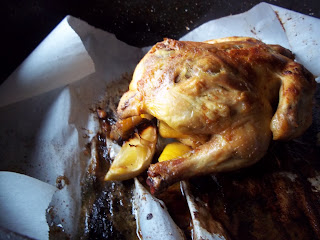 One of the most famous chicken recipes of all time is Marcella Hazan’s Chicken with Two Lemons. There are many good reasons for its popularity--its ease, its lack of hard-to-find ingredients, its healthiness (it's carb-free and has no added sugars), and its accessible flavors. But that's not why it's famous.  It's because the recipe is also known as 'Engagement Chicken.'  According to Glamour Magazine:

It all began 26 years ago, when then-Glamour fashion editor Kim Bonnell gave the recipe to her assistant, Kathy Suder, who made the chicken for her boyfriend, who, a month later, asked her to marry him. “It’s a meal your wife would make. It got me thinking,” says Jon Suder, who now has three children with Kathy. Details of the simple dish passed from assistant to assistant like a culinary chain letter. When Bonnell heard that her recipe had inspired three weddings, she dubbed it Engagement Chicken.

Supposedly, more than 70 confirmed marriages have been attributed to this chicken at Glamour alone and untold numbers elsewhere. Even Howard Stern, for heaven's sake, was roped into proposing after eating this chicken.

If you apply a scientific mindset to analyzing the power of this recipe, it's easy to see why preparing roast chicken and proposing are linked--correlation, not causation. If you're just in the courting phase with a guy, you're making him a steak. Tacos. Mac n' Cheese.  Dude food. Or if he's a food snob (heaven help you), beef bourguignon. But when you're making something simple,  that you probably want to eat yourself, that tastes good accompanied with healthy veggies, then something serious is going on.

Be forewarned, however, according to the comments on Glamour's website, the recipe isn't foolproof. One commentator wrote

i made the chicken in May....but it backfired. We broke up on the 20th and can't seem to get back to where we were. :( apparently my cooking is terrible, lol.


As for me?  Well, truth be told, I'm the loner type, not the marrying type.  I'm pretty set in my ways, and even as a kid, my dolls were more inclined to go on Adventures than to play Bride. I once said I would only consider marriage if I were wealthy enough that my husband and I could have separate houses, including separate bathrooms.  I like people, but I have enough self-knowledge to know that I need a lot of time alone to think, write, and pursue my various hobbies.

However, I hasten to add that I have many married friends and have tremendous respect for people who make their partnership 'work.'  Although, I have never really understood people who pine to 'get married' when they aren't dating someone.  I totally 'get' my friends who have been dating for x number of years and want to marry, but a few acquaintances and relatives have irritated me when they don't even have boyfriends and say that they are 'ready.' I guess I think of marriage, with the authority of the non-married, as being a relationship you have with a particular guy, rather than a love affair with the institution in general.  Which shows how screwed up I am, because I do understand when someone says they want a dog, cat, or horse, even though they haven't picked out the animal yet.

Anyway, rather than cooking a full chicken, and noting that free-range, organic Cornish hens were on sale, I decided to create my own scaled-down version of Chicken with Two Lemons or Engagement Chicken--friends, I present to you Cornish Hen with One Lemon.  Because nothing says 'single gal' like roasting a Cornish hen for yourself--it's great for a small dinner, with leftovers for lunch, and adorable, too.  It's wonderful to double for a small dinner party, if you have a friend over who you like very much, but not enough to actually want to share a chicken with as a meal.  Think of this as a 'friends with benefits' version of Engagement Chicken, or 'I love you, but not enough to touch hands with you after they have been picking at a chicken' or 'what to make if you're a gay guy, and don't want to give your best female friend the wrong idea.'

1. Preheat the oven to 400F. Pat the Cornish hen dry, remove giblets. Salt and pepper outside and inside.  Slice the lemon in quarters. Squeeze lemon juice all over the chicken, inside and out.  Stuff with the cut-up lemon slices.

Posted by chewingthefat at 1:57 PM