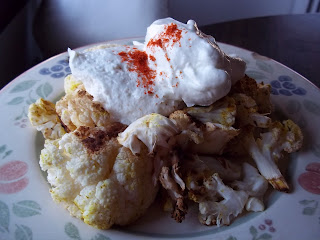 Originality is overrated.  I learned that in grad school. Shakespeare, the greatest writer who ever lived, cribbed 90 percent (or more) of his plots from myth, folklore, and history. It's the execution that makes something brilliant.

This is also true of food. The greatest test of any true chef is making a perfect omelet or roast chicken.

Still, every now and then, I become entranced with eating a slightly weird combination of foods that I usually don't post on this blog.  I tend not to think of those recipes as original, or the culinary equivalent of Cubism in the 20th century...rather I tend to think of them as the food equivalent of 'outsider art.'  Maybe creative.  Maybe insane. Not for everyone.

For a couple of months, my favorite 'weird food creation' has been crispy roasted cauliflower paired with full-fat or 2 percent-fat Greek Fage yogurt.  Most people I know eat  yogurt in a sweet format.  However, I've been trying to cut down on the sugar that I eat, so I switched to eating yogurt with vegetables rather than fruit.

Then, I heard noted food writer Melissa Clark promoting her new book on WNYC, my local NPR station.  Much to my chagrin, I learned that one of her new recipes was based on the same concept--the textual contrast between crunchy roasted cauliflower and ultra-creamy, fatty yogurt.

"That idea is mine!  Mine!" I shrieked, with all of the outrage of my childhood heroine Ramona Quimby when she learned that the evil, perfect blonde girl with the bong-bong curls had copied HER image of an owl wearing glasses onto her paper bag in art class.

Okay, Melissa's recipe was a leeetle different than mine. Melissa roasted her cauliflower with cumin and topped the Greek yogurt with chopped mint and pomegranate seeds.  I decided to come up with my own spicy version, with the ingredients I had on hand.

However, even if you aren't a fan of Indian spices, I urge you to try this recipe.  Leave off both the curry powder I suggest and the dried mustard, and just roast the cauliflower with olive oil and some fresh sprigs of thyme.

This is a healthy yet decadent-tasting main course when you make it with full-fat yogurt.  Don't bother with the fat-free stuff, although 2 percent Fage isn't bad, if you're really atoning for post-holiday indulgences. Incidentally, I also 'dry' roast cauliflower without oil, if you really want to tighten up the calorie quotient on this dish, which is already pretty minimal.

1. Preheat the oven to 430F.  Toss the cauliflower with the olive oil on a large baking sheet, lightly coating the vegetable.
2. Sift the curry powder, salt, and dried mustard together and sprinkle evenly over the cauliflower.
3. Roast until crispy for 20-35 minutes (cooking time will depend upon the toughness and size of the vegetable and your preference).
4. Serve warm topped with dollops of Greek yogurt.  Sprinkle paprika and salt on top of the yogurt, if desired.

Posted by chewingthefat at 12:59 PM