With the next post I'll return to my normal, semi-serious self. Right now, I'm eating lots of steamed veggies, Greek yogurt, roasted chicken, and salty nuts (girl's gotta live, ya know) and taking a brief baking hiatus.  So, until then, I leave you with another food personality test. (Before reading, remember to insert tongue firmly in cheek and adhere it to the side of your mouth with peanut butter and take my peanut butter personality test, if you haven't already).


What was your cereal personality as a kid?

Directions:  Ask yourself, what was your FAVORITE cereal as a kid?  Not the one you ate the most, but the one which you begged for incessantly as a child.  I can't make an exhaustive list of every cereal ever created, but of these, which one resembles your favorite the closest? 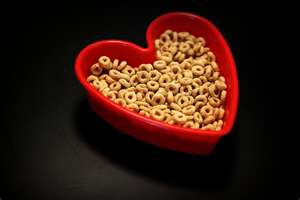 Cheerios
You were a worried, nervous kid.  You weren't picked on a lot, you were kind of in the background and were afraid of becoming the kid who was picked on, like Jill in Judy Blume's Blubber. You were never overweight, but had a limited array of kid comfort foods you liked growing up, like McDonald's hamburgers, macaroni and cheese, and French fries. You have the occasional, fleeting suspicion that you aren't a fascinating person.  You may have a Kleenex stashed in your sleeve right now.  You had allergies growing up. If you were a little bit crazy and liked Honey Nut Cheerios, you may have done something wild, like getting a PhD in French literature, but people still don't like to be around you when you start talking about one of your 'favorite subjects.' 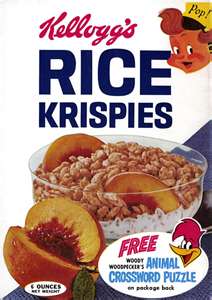 Rice Krispies
You were a sensitive, artistic and wounded soul.  You were thin and liked to draw as a kid, growing up.  You ate lots of fruit, including the fruit in your cereal. You may have had some food issues and did stuff like bring peanut butter and saltines to a video game party in the 80s, because you didn't like pizza. You may be a vegetarian now, or at least you don't like meat that much and prefer sushi. Your intellectual bent is shown in the illustration--Rice Krispies always had pretty crappy prizes, but then again, you could make dessert out of it. 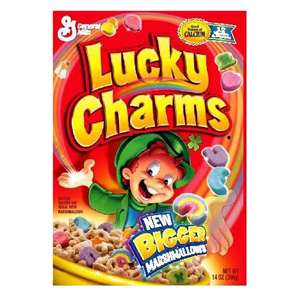 Lucky Charms
Everyone knows that Lucky Charms is simply an excuse to eat candy for breakfast. You have serious self-control issues around food. You probably did some kind of illegal drug in college. You're probably an investment banker or work in sales.  You drink a lot of coffee and eat fast food but you're spazzing out so much all the time it probably doesn't make you fat.  You still eat this stuff, but with skim rather than whole milk. 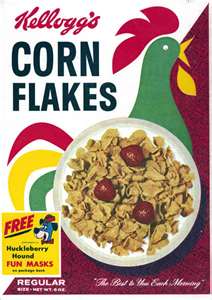 Corn Flakes
You're probably older than the average person reading this quiz and kind of stuffy when it comes to food.  You like roasted chicken, mashed potatoes, and peas for dinner.  You might even still eat your cereal with whole milk.  That's okay, because it's a little-known fact by people in the 21st century that corn flakes with sugar and whole milk tastes pretty much like dessert. 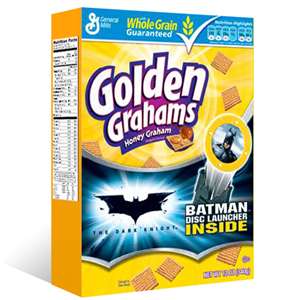 Golden Grahams
You loved the taste of this cereal as a kid, unlike the other kids who just begged for their cereals because of the cartoon characters on the front.  You're kind of a hippie, but not really. You like carrot cake with half an inch of cream cheese frosting, and tell yourself it's healthy. Not only did this cereal taste awesome, but it also had great prizes and commercials. Once, you poured real honey on it. That was SO good. Sometimes, when you eat it today, you start to eat it straight from the box and can't stop. 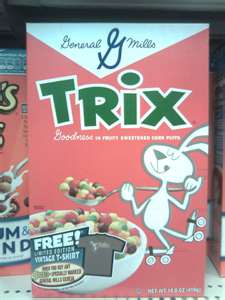 Trixx OR its circular cousin Froot Loops
You had a surprising amount of self-control as a child, It's fun to pick out the differently-colored nuggets and eat them in order, and unlike Lucky Charms all of the cereal actually tastes pretty good to a kid--i.e., like pure refined sugar.  Today, you don't eat this stuff (what adult can, given the cereal's glycemic index) and are probably a pretty good cook.  You're especially good at chopping things and baking. You still feel a pang of pity for the Trixx Rabbit.  But he probably is better off just having carrots and leaving the cereal to the kids. 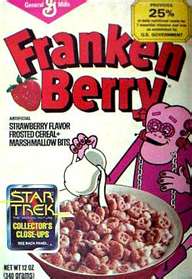 Frankenberry OR Count Chocula
This cereal tastes like sugary awesomeness and contains candy.  It only lacks the delight of differently-colored marshmallows like Lucky Charms. If you were allowed to eat this stuff on a regular basis, you grew up with parents that allowed the coolest junk food ever in the house.  You had brown sugar Pop Tarts, Double Stuff Oreos, and could eat frosting out of the can and no one would care. Today, you might be a foodie, but more of the kind who can makes some mean BBQ than someone who cooks with different kinds of vinegar. You probably don't live in a big city.

Cookie Crisp
You tend to buy things based on superficial packaging, rather than what is inside.  You've had some really bad relationships in your life.  Your parents found it easier to give you everything you wanted, like a bowl full of mediocre chocolate chips in cereal, than persuade you to try new things. The prizes in this cereal were always great (stuff that made noise, Hershey Bars, McDonald's coupons) but the cereal itself, even to the palate of a five-year-old, was forgettable. 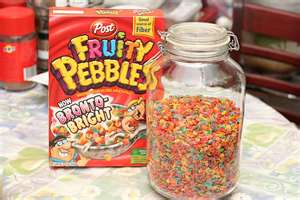 Fruity Pebbles or Coco Pebbles
Your parents weren't there for you when you were growing up--you came from a big family, had a difficult sibling, or they drank. Or all three. That's why they bought you cereal so sugary the spoon could stand in the multicolored milk after you ate it all. You've been in therapy at some point. 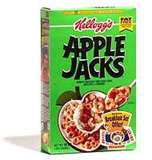 Apple Jacks
Nobody likes Apple Jacks best.  If you did, you were one of those weird kids who would pour apple juice or orange juice in his cereal or drink cereal milk with a straw. 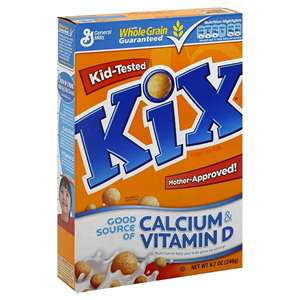 Kixx, Wheaties, or any other 'healthy' kids' cereals
You were really boring as a kid, the kind of kid who was satisfied getting raisins as 'dessert' his his lunch box.  You were too close to your mother and it became an issue in later relationships. 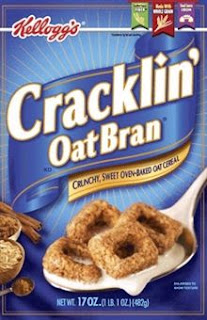 Cracklin' Oat Bran
Otherwise known just as 'crack.'  Insanely delicious, pseudo-healthy cereal with twice as many calories as other cereals.  You had a highly developed palate, even as a child, and loved sharp cheeses, pungent meats and spices, and weren't afraid of exotic ethnic foods. Your cardiologist hates you. 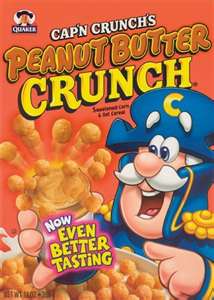 Captain Crunch (all varieties)
Sometimes, late at night, you get the urge to eat peanut butter straight from the jar while having a peanut butter sandwich slathered with honey, bananas and bacon.  You like older men and have some father figure issues.

Full disclosure: I no longer eat cereal, and prefer Greek yogurt every morning. However, as a kid, I did in fact eat all of these cereals at least once.
Posted by chewingthefat at 2:28 PM