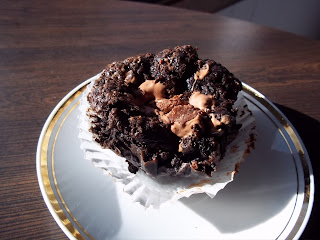 "You've never really had French food," said my mother.  She explained that the French liked to use odd and cheap cuts of meat with special sauces and marinades to make them flavorful.  She also told me about snails, frog's legs ("which supposedly taste like chicken") and sweetbreads ("which aren't what they sound like.")

She pointed out that the only non-desserts I consumed with any willingness were hot dogs, McNuggets, and pizza.  And the occasional slice of pepperoni, liverwurst, or provolone cheese.

"But I love chocolate mousse," I protested. It was true.  I could live on the stuff.  And eclairs. 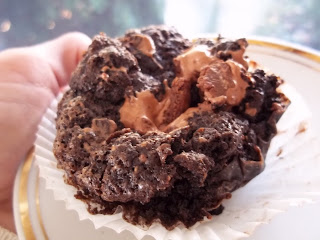 As a kid, pretty much my only 'healthy' preference was the fact that I liked Three Musketeers bars, which are slightly less fattening thanks to their whipped chocolate center. I also developed a fondness for Flyte bars in the UK, which has a similar texture.

Perhaps I burned some calories, running around my living room, pretending to be the men on the wrapper of Three Musketeers bars.

I never had normal crushes on actors. Oh, how I wanted to be loved by Errol Flynn, as he fought Basil Rathbone to the death in The Adventures of Robin Hood, one of the old movies I loved to watch as  I sat on my parent's couch in the weekend.  I also kind of had a crush on Basil Rathbone too, which is even stranger. 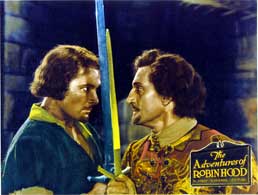 Much later, when I was in the UK, I took a course in stage fighting and discovered that actually using those weapons, even in pretense, is far, far more difficult than eating a candy bar. In a spectacular, humiliating finale, I did pass the final exam (a staged combat) but was so inept that my partner did not pass. In other words, my lack of coordination made someone look even worse than he actually was at swordplay.

At some point, I would like to take another crack at the rapier and dagger.  Until then, I will simply have to find ways to make use of left-over Halloween Three Musketeers candy.

An interesting factoid before you bake: Three Musketeers got their name not because the creator was a great Alexander Dumas fan (although why wouldn't he be) but because the original bars came in three flavors per bar (vanilla, chocolate, strawberry). The vanilla and strawberry was phased-out during wartime rationing, although now the bars come in multiple flavors again. I wonder why Mars doesn't bring back a vintage version of the candy bar, incidentally. 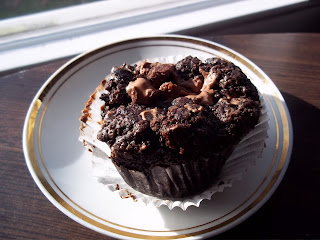 1. Preheat oven to 375F. Line a muffin tin 12-18 cupcake liners.
2. Blend the oil, eggs, yogurt, and vanilla. Sift the flower, cocoa, sugar, baking powder, baking soda, and salt together.
3. Incorporate the wet mixture into the dry.  Fold in the chocolate chips.
4. Fill the muffin tins with the batter. Cut the mini candy bars in half, and put each half, cut side up, into each muffin tin.
5. Bake until a toothpick can be extracted clean, approximately 30-35 minutes.  The timing will be affected by the size muffin tin you choose to use.
Posted by chewingthefat at 6:57 AM