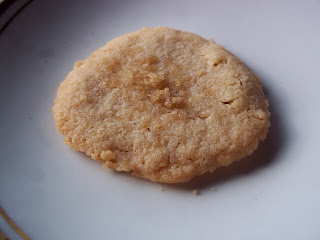 When I was six or so, I loved the Brady Bunch.  I even stuffed my hair into pigtails, in the hopes of looking like Cindy Brady. 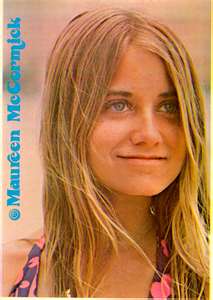 Of course, Maureen McCormick developed bulimia, but all I knew at the time was that she had cool, flippy hair.  I was convinced that despite my brown locks I would grow up to have cool, flippy blonde hair that I could swing in a boy's face when I wanted to flirt with him. Instead, my mother insisted cutting my curly hair at home to save money, leaving me with a vaguely Peter Pan-esque, Davy Jones-style haircut rather than that of the coveted Marsha.

By the time I hit nine years old, my hair had grown into a great, fluffy mass. Kids used to call me "the wig lady" in school, and no amount of Nexxus could tame it.  Part of the problem was that big hair was supposed to be a 'good thing'  in the 1980s, and every hair product was designed to maximize rather than minimize volume. As a tubby kid with thick glasses, the last thing I needed was hair to make me look even bigger.  I tried using Pert Plus once, to be like the other girls in my class. Shampoo and conditioner in one?  Oh, they lied!  My mother had to cut out a knot the size of a brillo pad from my 'fro after I used green goo.

Unsurprisingly, I would come home every day from school, my hair crunchy with spitballs and cry.

These formative experiences often made me want to seem as unobtrusive as possible. Except when I was performing (I had a great 'turn' as the Queen of Hearts in 6th grade), I tried to hide.  By the time I was an adult I had perfected the art of disappearing.  I could creep so stealthily that despite living in some horrible neighborhoods in my 20s, no one ever mugged me (knocks wood) because I knew how to dart in-between the shadows.

Unfortunately, being unobtrusive is great if you're an chubby, unattractive prepubescent. Being a blogger aspiring to be the next Hot Young(ish) Thing...it ain't so great to be unobtrusive.  So I was totally jealous when I stumbled upon Brown Butter Brown Sugar Shorties by Smitten Kitchen.

I am obsessed with browned butter, but what made my head explode was how this recipe with nary and egg, and only the most basic ingredients of sugar, flour, vanilla and salt could generate 282 comments, debating the recipe's virtues.

The debate was this--following Deb's directions, and in Deb's pictures, thick, luscious slabs of cookies were produced by the rolled dough. Yet about half of the commentators, while they loved the taste, said that their efforts produced thin, crispy little rounds and complained about the sandy taste and the spreading. The other half said that these were the best cookies they had ever tasted.

You can see from my photograph what my results were.... 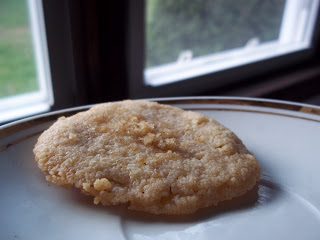 Some spreading but a tasty cookie.  Reading comment 258  (yes, I did not go to graduate school in vain!  I read the comments), I didn't cream the browned, chilled butter to create a more solid dough.  Then, after the cookies cooled, I refrigerated them, to firm them up a bit.

Although they are rather plain, they taste lovely.  Much like the shy, slightly unattractive girl on the cookie platter of life who has inner beauty.

I made the recipe almost exactly as stated, but I'll rewrite it for 'technique's sake' since I incorporated some of the comment's suggestions in what I did:

1. Brown butter in a pan, remove from heat and cool for 1 hour in the refrigerator


2. Mix butter and brown sugar together, but do not cream, then add vanilla.   Sift salt and flour together, incorporate into butter mixture.

3. Form dough into a 'log' (mine was about eight inches), wrap in parchment.  Chill for 2 hours until very firm.

5. Bake for 10 minutes. Remove from oven.  Cookies will be very fragile.  Chill after thoroughly cooled for at least 1 hour in the fridge to create a (slightly) sturdier cookie.


Posted by chewingthefat at 4:21 PM