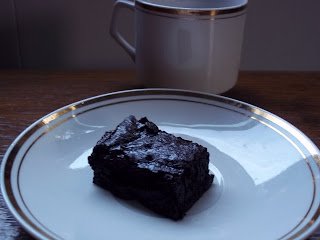 I'm a quitter. Until I realized in high school that if I didn't get As I'd never break away from my mother and grandmother and would be commuting to the state U from home, my report cards were straight DFAs--Ds, Fs, and As.  I either got something instantaneously (reading, writing, poetry, drama, looking sullen and angry) or I didn't try at all.

It didn't help that the subjects in which I was the poorest were math and gym, which tend to attract teachers who have a black and white mentality.  "What are you DOING?" they would say, because my wrongness was so incomprehensible to them. My failed volleyball serve was a profanation of the human body. My solutions to SAT math problems were so off, they weren't even one of the 'incorrect' multiple choice answers.

My scores were always a slew of contradictions. I got 100 (yes, 100) in biology and barely scraped by with a B in chemistry and calculus. If I didn't 'get' something instantaneously, I didn't bother to try. My verbal SAT score on the OLD version of the SAT was 200 points higher than my math score.

"I am a conscientious objector to the sport of volleyball," I explained to my gym teacher.

I did get into Harvard Divinity School for my master's degree which sounds smart on paper, but I could barely pass the super-easy 'reading knowledge' test for a foreign language to graduate (pesky grammatical memorization also never came 'easily' to me) and I never got Phi Beta Kappa at Wesleyan, simply because I refused to take a single math or science course while I was there.

Looking back, it's unsurprising that I have an obsession with British culture, a nation which is relentlessly self-critical and has always idealized coolness and indifference and not seeming to try very hard. "Yes, the sun never sets on the British Empire and we do have Shakespeare and all that--but think what we could have accomplished if we actually tried.  Tea?"

My academic degree in religion didn't lead me to have many conventional spiritual experiences, but I did have one revelation in my Introduction to the Hebrew Scriptures class, which was ironically the only class I got a B+ in rather than an A or A- (in a kind of reverse Peter Principle, the higher up the educational ladder I progressed and the more useless and obscure the knowledge I collected, the better my grades).

Quoth the TA: "Anyone can do one thing well.  A genius is someone who can do two unrelated things equally well and make a connection between them."

He was referring to a professor he admired, a man who was a great scholar of Biblical history who could also write very engagingly for a popular audience.  But his words haunted me.  They seemed so true, suddenly. Hemingway was a great writer who poured his ability as an outdoorsman into his prose. Most of the great Victorian writers I admired (Dickens, Bronte) were also enthusiastic amateur dramatists, which clearly helped their writing.  George Eliot was an amateur scientist and historian.

And even just the 'successful,' happy people I knew in life seemed to be balanced enough to be able to enjoy sports, do some fun extracurricular activities, do well in class, and not be haunted by the need to find the 'one thing' at which they excelled.

I realized that I had to break a nasty habit--one even more entrenched and nastier than my addiction at the time to eating Häagen-Dazs and cheese fries for dinner.  I had to stop being a quitter at things at which I sucked.  I had to accept that I would have a slower learning curve for lots of important subjects  in my life,and in a way that is a more painful truth than admitting to yourself that you can't do something at all.

Not being a quitter seems like a good theme for a post at the start of the school year, and these brownies would make a great after-school snack.  I am no longer a vegetarian, but during my attempt last year to go vegan, I had two colossal failed brownie experiments involving recipes with egg replacer and bananas.

These brownies are ultra-fudgy, dense and 'all about the chocolate' since they lack butter or eggs. I still eat vegan, and have many vegan friends, so I am glad I worked hard to find a recipe that is just as awesome as standard brownies.

However, I must add (since I have not yet entirely exorcized the laziness from my bones), these have the adavantage of being a one-bowl recipe, and are easier to make than 'regular' brownies. No melting the chocolate and no creaming the butter and sugar. 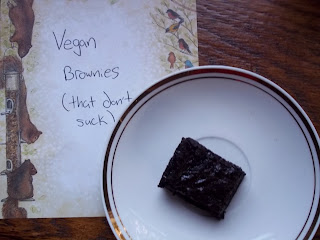 Topping: 1-2 teaspoons of sea salt (enough to cover the pan)

Posted by chewingthefat at 9:33 AM