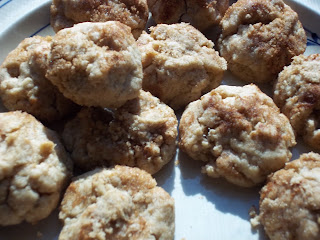 I still recall how in college, a girl once asked me to go with her to the bathroom to tell me a secret. After pestering me for several minutes I finally acquiesced (we were dining in a group at Friendly's, and I didn't want to miss the chance to order the Reece's Peanut Butter Cup sundae when the waitress took dessert orders), the girl erupted into peals of laughter, saying that she wanted to trick me into going with her because I always went to the bathroom alone, rather than in pairs, like other girls.   Which she found funny.  I felt a strange, murderous anger at her when she said those words and giggled.

I've never been a great fan of secrets.  I don't mean the dark, inevitable secrets that are woven into every person's life. Bad secrets are one of the symptoms of being an adult. Oh my readers, I could tell you secrets...about infidelity and incest and abuse...and unrequited animal lust...but I have to leave something for the book I hope to write to tantalize you to purchase it.

The secrets that annoy me are the petty little secrets people create to make themselves feel important. Or the 'not so secret secrets' like the Facebook campaigns to 'raise awareness about breast cancer' through secret, cryptic postings (an oxymoron) about bra colors and candy. Personally, based upon my experiences with my late mother's struggles with lung cancer, I think if you need to raise your awareness about cancer you should go to a hospice. But my airing of this unpopular opinion just goes to show you how bad I am at keeping my emotions a secret.

I still remember the first secret I ever kept, and I must confess that my own bad behavior perplexes me.  I was five years old.  As a kindergartener I was supposed to take Bus 2 to my school--I remember this because I had to make a purple construction paper name tag that said Bus 2 to hang around my neck the first day of school. I took Bus 2 the first week. But Bus 3 also ran past my house, and for some reason, it stopped for me one morning, and I continued to take it day after day.

I felt that I was doing something criminal, taking the wrong bus and not informing the Bus 3 driver of his mistake and waiting for Bus 2. The Bus 2 driver was kind of creepy, plus there was a boy named D-- who used to make fun of me on Bus 2. The sensible thing would have been to ignore Bus 2 and continue to take Bus 3, but the idea that taking the wrong bus made me both stupid and evil tormented me, and I began to beg my mother more and more to let me stay home from school.

I concocted an elaborate story, based upon the fairy tale books I loved, about how D-- had tripped me in front of class, and how the teacher favored D.  Embellishing further, I explained that my teacher had made us go into the scary crawlspace of Wall Street school to punish us for some small infraction. Finally, I began to just use illness as a reason to stay home, and when I discovered that my hypochondriac mother and grandmother wouldn't question me when I said I was 'sick,' I missed over 50 days of kindergarten. I already knew how to read and did very well on standardized tests, so the school passed me onto first grade and no one ever knew my terrible secret about taking the wrong bus.

I don't know why I was so obsessed with the idea that taking Bus 3 was a 'bad' thing.  And why I felt lying was better than just admitting my mistake. Perhaps I found school more unpleasant than I remember in those early grades, although I didn't really start to hate school until first and second grade. Then, I became the target of genuine bullying, in ways far more devious, painful, and hideous than my feeble little imagination could have predicted.

In this blog, I try to be an open book and to tell the truth.  However, since I have grown into a woman who loves school and taking classes, when I heard about this 'secret ingredient' snickerdoodle recipe from NPR (national public intellectual crack for geeks) I had to try it.

While using mayo instead of butter and egg may sound trashy, if you use homemade mayo made with a neutral-tasting olive oil--I used Alton Brown's recipe with mild olive oil for baking as a base--it actually has less saturated fat than a more traditional snickerdoodle and is easier to prepare.You could also use a good commercial brand (by 'good' I mean no high-fructose corn syrup).

Full disclosure: The mayo I made turned out pretty crappy and broken, and would have made a dreadful sandwich mayo, but the cookies turned out well.

I left out the dry mustard from Alton's recipe, and regardless of what mayo you use, I'd suggest one that doesn't have a lot of garlic and spices.  Although if you do try a Dijon or spicy mayo, I would be interested to hear about the results... 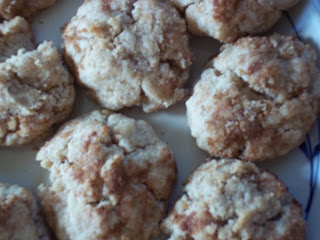 (My version is slightly different than NPR's, so I am writing out what I did).

1. Preheat oven to 350 degrees. Line two baking sheets with parchment paper.
2. Sift flour, sugar, spices, and baking soda together.
3. Mix the mayo with the vanilla extract. Spoon into the dry ingredients.(This recipe is actually easier than regular snickerdoodles, because there is no need to cream the butter and sugar!)
4. Sift together the light brown sugar and cinnamon for the topping.
5. Using a tablespoon or ice cream scoop, spoon batter into 1-tablespoon balls. Roll in topping until well-covered.
6. Bake for 11-12 minutes, rotating once about half-way in the baking process. No need to flatten the cookies. The cookies will seem slightly underdone and puffy when taken from the oven.  Cool for five minutes, then remove from the baking sheet. Cookies will solidify after 1-2 hours.

Posted by chewingthefat at 7:59 AM