Baby I Was Born This Way Blueberry Lemon Loaf 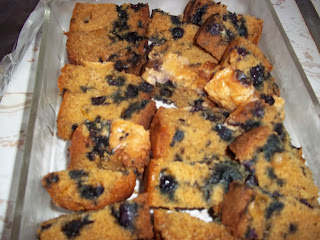 Baby I Was Born This Way Blueberry Lemon Loaf

"I'm as corny as Kansas in August,
I'm as normal as blueberry pie.
No more a smart little girl with no heart,
I have found me a wonderful guy!"

When I was in preschool, I used to listen to the entire soundtrack of the Broadway version of South Pacific on an LP as I jumped up and down on my mini-trampoline. The floorboards must have been strong, since I don't remember the record skipping and I wore what was politely called 'pretty plus' sizes at the time.


I liked the film version of South Pacific, too, but even then I preferred the stage to the screen.

According to my mother, the only way to make me sleep as a baby was to play Broadway.   South Pacific was my favorite as an infant. Perhaps it was one of mom's favorites, too, since it's all about a blonde girl from a small town who finds love in the arms of an exotic man, after they learn to tolerate their differences. Ironically, the love between an Irish-Italian-German Jewish girl and a Greek-American man proved to be far more difficult to navigate in 1980s New Jersey.  A failure to make mountainous piles of pastitio, speaking English, and having two eyebrows made the obstacles of two biracial children from a hidden marriage in the 1940s seem pretty tame.

I used to sing "I'm In Love With A Wonderful Guy" in the summer and then ask to eat blueberry pie as a snack (usually Entenmann's, sometimes Delicious Orchards if I was lucky).

"Some Enchanted Evening" didn't do it for me, though--not then and not now. I liked Rex Harrison's "I've Grown Accustomed to Her Face" from My Fair Lady much better.

Needless to say, I adored pretty much every tune from The Sound of Music and Annie. (The latter was an early introduction to Tim "Dr. Frank N. Furter" Curry).

My mother's favorite musical film was The Wizard of Oz.  She liked to tell me the story of seeing it in the theater for the first time--how disappointed she was when it began in black-and-white, and how magical it seemed when the technicolor spilled forth from the door, opening up into Oz.

My mother loved musicals because of the escapism they offered her--into fantasy, elegance, and easily solvable problems--as did I. I suppose they taught me some bad lessons about life.  Even the most horrible threats of the 20th century could be solved by singing and dancing across the green hills of The Sound of Music.

I wanted to be just like Judy Garland--she was one of the few brunette heroines in a sea of blonde Disney princesses--but I hated the end of the film. I read my way through all of the Oz books and reminded everyone who would listen that in the BOOKS Oz is a REAL PLACE and Dorothy goes to live there as a PRINCESS FOREVER. (And yes, even at that tender age I liked to explain how Julie Andrews could really sing and Audrey Hepburn was DUBBED in the movie version of My Fair Lady).

As you can see, given my natural pedantic tendencies, baby, I was born to get a useless degree in the humanities in college!

I'm sure that some overpaid Freudian analyst would have had some interesting things to say about my upbringing if I'd been born a gay man in 1950s America, versus a heterosexual woman in the late 20th century.  Fortunately, in today's more enlightened times we can all listen to South Pacific and eat blueberry pie without thinking too much about it.  Or listen to Lady Gaga and eat this yellow brick of a lemon blueberry loaf.

2. Whisk together the flour, baking powder, and salt.

3. Mix the butter, sugar, eggs, cinnamon, zest, and milk.  Fold in the dry ingredients, one scoop at a time.

4. Lightly flour the blueberries. Fold them into the batter.

5. If you're making the filling, cream together the cream cheese, sugar, lemon juice, and egg yolk.

7. Bake for approximately an hour until a toothpick is extracted clean. Cool for at least an hour, and refrigerate to 'set.' 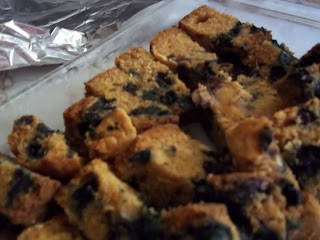 Adapted from Sweet Luvin' In the Kitchen
Posted by chewingthefat at 8:13 PM