Vegan, gluten-free pumpkin bread for everyone 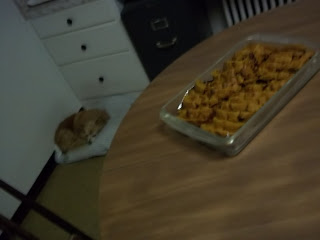 My job as a camp counselor for an academic camp was not the worst job I ever had.
However, it was surely my lowest-paid labor, on a per-hour basis.
I know if you're a middle management type with an MBA you believe that only inspiring mission statements really motivate drone-level workers to perform at a high level, not extra pay.  But I beg to differ.
As the camp was 'academic' rather than sports-oriented, as well as taking care of a tribe of eleven 12-to-13-year-old hormone-addled girls, I also had to teach creative writing classes to groups of about 20 campers at a time. I was nineteen. My schedule at Camp Smartypants was something like this: 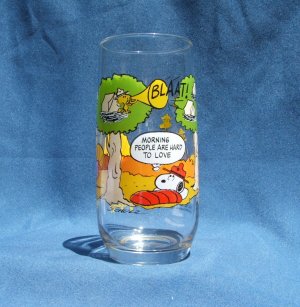 6:30am: Get up.  Review morning lesson plans.  Make myself look presentable.
7:00am: Rouse charges. Realize the sad wisdom that teenager's brains are oriented on a later time frame than adult's brains.
7:30am: Pry hairdryer from the last teenage girl's white-knuckled hands.
8:00am: Supervise breakfast. Make sure quasi-anorexic teenage female charges eat said breakfast. Watch the rest put a mixture of grape juice and orange juice in their Lucky Charms or pour mountains of powdered sugar on cartoon-shaped pancakes.
8:30am-9:30am: Office duties. Make coffee for camp directors (they always complained that it was too strong when I served it). Sort mail (pre-Internet, there were lots of pink envelopes encrusted with stickers for various campers).
9:30am-10:30am: Supervise study hall. Listen to daily recitation from angelic-looking mildly autistic boy who tells me that he can read an entire Lord of the Rings book in an hour, and does so every study hall. (Not that my social skills were any better when I was his age, incidentally). Prep for the class I was teaching.
10:30am-11:30am: Teach writing class. Try to explain to students that not everything they write is genius and revising is a Good Thing.
11:30am-12:30pm: Lunch.
12:30pm-1:30pm: Teaching second class.
1:30pm-2:30pm: Free period, usually spent getting supplies with my own money for camper's birthday celebrations, organizing materials for my classes, or doing laundry.  Occasionally running on my pale, pasty legs around the river.
2:30pm-3:30pm: Campers' supervised free period. Of course, I got to supervise the snack bar, which meant I was basically selling the sugary fuel that would make my life a living hell for the next hour.
3:30pm-4:30pm: Second supervised study hall.
4:30pm-5:30pm: Make sure my charges were ready for dinner.
5:30pm-6:30pm: Dinner.
6:30pm-7:00pm: Get ready for evening activity.
7:00pm-8:30pm: Evening activity and 'decompression' (for kids).
8:30pm-9:30pm: Get ready for bed.
10:00pm-1:00am: Sit in the hall making sure kids don't bust out and have sex with campers of the opposite gender in the nearby dorms.
This was the schedule 7 days a week. Every 10 days I would get a day off. Because I am not a 'team player' I immediately left the campus on those days.  However, counselors who were 'team players' would stick around just in case they were needed.
Although I have a half-sister, I was raised as an only child. I selected my college specifically because I could have a single room. (I shared my personal room with another counselor, but at least I had the bottom bunk).
After about 2 weeks of this schedule, I looked like Christopher Walken at the end of The Deer Hunter.  I actually saw an interview with Walken who said he used his camp memories as the 'dark place' within himself when shooting the Russian Roulette scenes. Ah, Christopher--you are a kindred spirit. 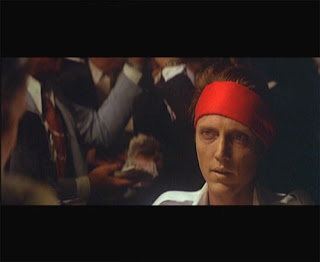 The one 'comfort place' in such situations where you don't have a moment to yourself, and you know that one of the other counselors--a former counselor at Camp Smartypants--lost his virginity there at age 12 and you will be strung up if this happens if one of your girls sneak out and do the same--is food.
However, camp food, despite the high cost of tuition and the low rate of pay ($1,200 before taxes for every three-week session back in the go-go 1990s) was beyond abysmal. Microwaved pancakes, vats of sugary commercial cereal for breakfast, square tater tots and hamburgers and hotdogs for lunch, and mystery chicken for dinner with iceberg lettuce was the daily fare.  One healthy and athletic girl said: "I can't LIVE like this, I will be 300 pounds on this crappy food." I hate to use gender stereotypes, but the male teenage counselors merely complained that the portions were too small.
After a week living off of Special K, white hot dog buns spread with mustard and tomato slices, and undressed iceberg-laden salad--and store-bought, pre-warmed cookies (of course)...I was a desperate woman.
I should note that Camp Smartypants was held at a university, and another camp was held on the same premises--a ballet camp. Waif-like reeds wafted through the trees, along with Camp Smartypants' sturdier campers lugging backpacks filled with textbooks and angst.
The section for the ballet camp in the cafeteria was roped off, and one day, I blundered in.
For breakfast, there were individual berry salads, topped with a dusting of granola, chilled Light n' Lively yogurts in unusual flavors (like Pina Colada) and enormous bran muffins stuffed with raisins. Of course, being dancers, all of the girls were simply drinking tea and sharing an orange amongst themselves--one per table.
I love bran muffins!  And trust me, after living off of white bread, they were necessary!
Lunch was mozzarella and basil salad, in a delicate, ballerina-sized portion, coupled with a light whipped chocolate mousse and raspberries. I've always believed that if you act like you belong somewhere, no one will notice you, so I confidently selected my chef's salad with chopped eggs and rosemary-toasted croutons with flaked tuna salad for dinner.
My hair was long then, so just to be safe I'd tie my hair into a bun before heading into the cafeteria when I took more food--day after day.
Eventually, Camp Smartypants' director, huddled and miserable over his cheese whiz burgers and 'tots' noticed the Bad Example I was setting.
So you know my terrible secret, dear readers, I once stole food from the tribe of the Black Swan and didn't feel particularly guilty about it.  I am the blackest swan of all.
But just to show that I am generous of spirit, here is a gluten-free vegan pumpkin bread that is so delicious my yoga studio decimated it when I brought it in to share with everyone. It's adapted from Joy the Baker's version, but I substituted orange zest for some of her spices.  I realize that pumpkin is not seasonal, so forgive me that, at least, dear readers. 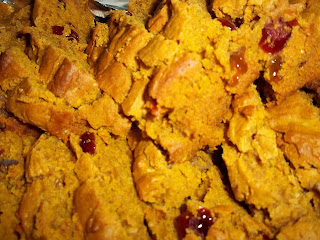 2. If necessary, briefly plump the cranberries by soaking them for about a minute or so in warm water. Don't put them in boiling water, as they are more fragile than raisins. Drain immediately. 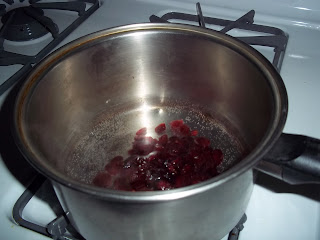 3. Sift the flour, sugar, baking soda and powder, salt, and cinnamon together. 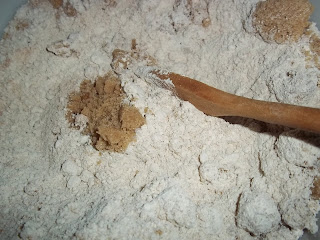 4. Mix together the rest of the wet ingredients (pumpkin, oil, honey or syrup, water).  I used organic pumpkin because I couldn't find the regular (cheaper) version, to be perfectly honest, but because I did, this bread is even more PPC (pumpkin politically correct)! 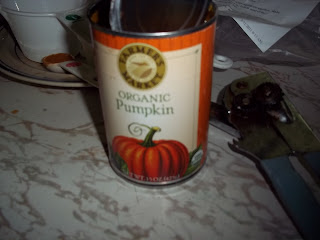 5. Fold in the nuts and the cranberries, lightly flouring them if desired to minimize sinkage. However, I did not and the bread was still 'spackled' nicely.
6. Pour mixture into the two loaf pans.  Bake for 1 hour to1 hour and 15 minutes. My loaves took about an hour before a toothpick could be extracted 'clean.'
7. I had to cool the bread for at least an hour before removing from the pan and slicing--it seemed to 'retain' its heat for a long period of time.
8. Slice, serve, and immediately share with others to prevent yourself from eating too much of this incredibly delicious bread! 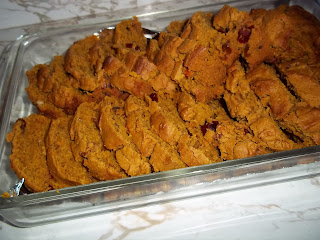 Posted by chewingthefat at 7:34 AM