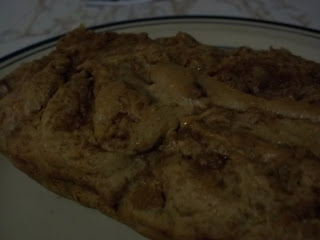 I'm old enough to have taken the paper-based version of the GRE. The computerized version has fortunately eliminated the logic game section, but the LSAT still has them.  Here is a sample, cribbed from this prep website:

"Hans is considering purchasing each of six items arranged from left to right on a shelf at the travelers’ warehouse—a razor, a stereo, a television, a UV lamp, a video camera, and a watch. Each of these items is powered either by batteries or by an adapter, but not by both. The following conditions apply:

Which one of the following could be the order, from first to sixth, in which the items are arranged on the shelf?

I never did particularly well as these games, because my brain always went astray.  Why is Hans making an either/or choice between a razor and a stereo?  Surely shaving is more important than a new sound system?  What kind of a hippy are you Hans?  And a U/V lamp?  Dude, Hans you don't have a razor and you're thinking of buying a U/V lamp instead?  Or a video camera?  Grow up, Hans!

However, glad as I am to see the logic games disappear from the GRE (and honestly, if you're studying deconstructionism, linear logic is definitely NOT something that will be useful for you in grad school--trust me) I think that all culinary students should have to take a logic game test.  Why?  Consider what even the average mother might be faced with, when having a birthday party for a child:

A: is a lacto-ovo vegetarian
B: is allergic to peanuts
C: is on an all raw, vegan diet
D: can't have any refined sugar, because it makes him hyperactive
E: violently allergic to red food dyes and hates pizza
F: will ONLY eat peanut butter and jelly on white bread
G: nothing can touch on the plate, including cheese 'touching' the crust of the pizza

Even as someone who could be classified as a pain-in-the ass guest myself (no flesh or coconut, please) has to be sympathetic to a mother who wants to throw up her hands in despair, and longs for the early 80s parties of my youth, where the options of even the most dedicated hostess such as my mother were as follows:


I do recall one girl who once bought a pack of saltines and a jar of (smooth) peanut butter to an arcade party (yes, I am that old) because she didn't eat pizza, but that was as esoteric as the choices were...


But because I am not one of those purely omnivorous people myself, I am very sympathetic to people with food allergies, intolerances, and special diets. So, the next time you need to bring something to a brunch, I suggest this bread.  The recipe originates at the Post-Punk Kitchen, was modified by Cookie Madness (thanks, Anna!) and this is my version. It is vegan and soy-free...and peanut-free, since I topped it with a cinnamon crumble.  I also used oat flour, so people who are trying to avoid wheat can enjoy it, and oat flour is sturdy enough--and the recipe is forgiving enough--that it doesn't need any additional binders or stabilizers.

It will offend the Atkins types, I suppose, or people who don't eat sugar.

For those of you who are 'like that'  and because it is Mother's Day, and my mother's favorite food was steak, this is for you:

Sorry I turned out to be such a disappointment as a meat-eater, mom! 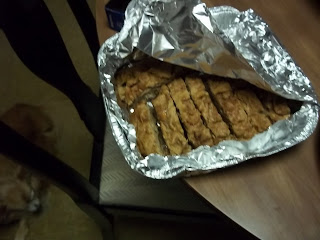 1. Preheat oven to 350 F. Line a 9X5 or 8X4 loaf pan with parchment.
2. Mix the almond milk and vinegar to create vegan 'buttermilk'
3. Sift the oat flour, baking soda, salt and cinnamon.
4. Mix the oil, sugar,and mashed bananas together.  Stir in the milk.  Don't be alarmed if the mixture smells like a salad. Incorporate the flour mixture.  Once the ingredients are well-blended, pour one half of the mixture into the prepared loaf pan. Sift together the topping mixture. Swirl half the cinnamon and sugar through the batter in a pan with a knife. Add the rest of the batter, then top with the remaining cinnamon and sugar.
5. Bake for 1 hour.  Toothpick should be able to be extracted 'clean.'

Posted by chewingthefat at 8:09 AM