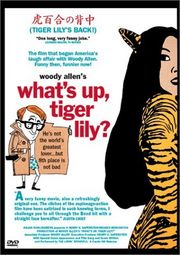 In middle school, I had a mild obsession with Woody Allen films, spawned by my love of Annie Hall. The obsession quickly died after Allen decided to stop making funny, zany films and instead switched to producing tortured vehicles about men in love with much younger women.  But I do recall seeing this film: What's Up Tiger Lily?

Allen doesn't appear in the film at all.  None of his usual 'cast of characters' does (no Diane or Mia). The film is a re-dubbed version of a Japanese spy film International Secret Police: Key of Keys. The original flick was supposedly so awful Allen was given license to rewrite the entire film. Even Allen's redubbed version isn't that inspired, although its premise is--the plot revolves around a quest for the world's best egg salad recipe.


After seeing the film I had an odd craving for egg salad--odd, I say, because as a child I seldom ate real food willingly.  But I scarfed down an egg salad sandwich (my mother's standard mayo, mustard, celery variety) on light rye quite willingly--proof in the power of suggestion.
I'm always in search of a good egg salad recipe. However, when I stumbled upon this recipe for peanut butter egg salad I was a bit taken aback.


Even as a child, I was always fascinated by unusual applications for peanut butter. One of my favorite characters in a children's book called The Cybil War was a feisty, red-headed girl who used to practice the piano with a jar of peanut butter and a carrot beside of her--every so often, she'd pause, dip the carrot in the jar, and then go on playing.


The original recipe I saw called for a single teaspoon of peanut butter, stirred into 8 eggs and 3 tablespoons of mayonnaise.  On first glance, this seemed like a rather pointlessly petite addition to a massive amount of eggs.


I decided to give the combination a try, to 'take one for the team'--that is, for Team Food Bloggers United. I admit that compared to some bloggers, I am not as adventurous an eater as I could be--this is not the blog to read if you're looking for someone to eat chocolate-covered crickets or Japanese pufferfish.  However, peanut butter and egg salad seemed to be a reasonable combination to try.  However, to truly get the 'full peanut butter experience' I decided to amp up the intensity. This is my redubbed version of the original. 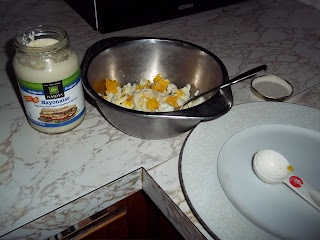 Mash the eggs, mayonnaise, and peanut butter together in a bowl.  Season to taste.


Verdict: Not bad.  I think some coarsely chopped seasoned peanuts, more hot pepper, and some shredded cabbage could turn this into a Thai-inspired dish. The taste as written is very 'kid friendly' and milder than egg salad made with Dijon. 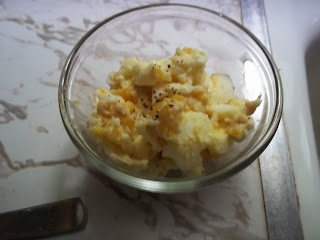 It's not quite worth international espionage to obtain the recipe. But from now on I do think that ALL bad movies should be dubbed so that their plots revolve around the acquisition of the perfect egg salad recipe.  Even if they were originally written in English.
Posted by chewingthefat at 8:15 AM