I'm always suspicious when I hear the word 'lazy.'

As in: "he's such a bright boy, if only he weren't so lazy he could get fantastic grades."

Or: "if only she weren't so lazy, my neighbor could have a lovely flower garden."

Or: "she could be one of our best employees if only she weren't so lazy and didn't read recipes and surf the IKEA catalog online when she should be working ."

Usually what the critic really means when they say 'lazy' is that the individual whom they're criticizing has a different agenda than the teacher/neighbor/boss would like them to have.  Pick up the lazy boy's notebook and you'll find an intricately scrawled, detailed cartoon with haunting, witty pictures. Perhaps the neighbor with the bare yard prefers going running in the morning than weeding her flower beds. Perhaps the non-model employee has a life outside the office and a hobby that she feels more passionate about than her work. These people aren't lazy, they just don't happen to be doing what you want them to be doing at the moment. 'Lazy' sometimes really means 'out of my control' and/or disobedient.

And given that a friend of mine who speaks five Asian languages, has two Ivy League degrees, and is of Scandinavian heritage STILL had trouble deciphering the charmingly incomprehensible instructions that come with the deceptively simple looking furniture at IKEA, I would hesitate to call anyone who shops at that furniture store 'lazy.'

However, in terms of my own prejudices regarding laziness, I admit I feel a bit of a stab of disappointment whenever I see a beautiful picture of a cupcake or bread on Tastespotting or one of the major food websites, click on the recipe, and discover that it's made with a mix, particularly a commercial mix.

Now, I was raised in a Country Time Lemonade/ Duncan Heinz/ Pillsbury Crescent Rolls kind of a home. My mother was far from lazy--she had worked to financially support her family since she was sixteen, and even when married took care of her own home as well as my grandmother's home, including pruning the trees and cleaning the gutters. A combination of growing up in a home of a woman who didn't really cook either (my grandmother had one 'signature dish' and it was Shepherd's Pie), food neurosis, a controlling husband who was disappointed she couldn't cook like his Greek mother, and pure exhaustion caused my mom to resort to very plain cooking--or very from-the-box cooking.

The reason that I turned to cooking is that I wanted to find a healthier path for myself. But I still find it weird that websites that celebrate food have so many pretty pictures of breath-stopping arrangements of food that probably doesn't taste much better than wax-encrusted apples or lemon chiffon pie sprayed with shellack.  Sure, I can make a pretty, crackless cheesecake with ease--using cement.

On the other hand, some of my greatest blogging inspirations have used mixes. This provokes me to reflect...what is from scratch cooking, anyway?  Does the fact that I use canned pumpkin make me a lesser cook?  Should you be milling your own Rice Krispies for marshmallow treats? Home-crafting your own M&Ms?

I suppose where I draw my personal line is this:

Weird chemicals on the label=bad


Pronouncable ingredients on the label=good

So I didn't feel too bad using organic, natural baby food for this carrot bread. The baby food had only two ingredients--pureed carrots and water, and it was a great, easy way to skip the step of shredding the carrots. Next time I make a carrot cake, I may try substituting some pureed carrots for some of the oil in the recipe.

This recipe uses oat flour, so it's gluten-free, plus it has Vitamin A-packed carrots, Vitamin C-packed citrus fruit, immunity-boosting honey, raisins, and even pecans for a bit of protein. So if you're really creative in your rationalization, you can certainly justify smearing some cream cheese on this and calling it a balanced dinner. 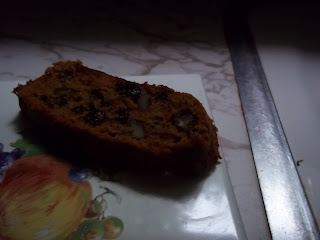 1. Preheat the oven to 350F. Oil and line two 8X4 inch loaf pans with parchment.
2. I mixed everything in one bowl. Mix all of the ingredients in order and after adding the spices sift the flour with a fork before adding the 'wet' stuff and folding in the nuts and raisins. I bought baking raisins with extra moisture, and didn't even bother to plump them. And I bought pre-chopped pecans.

3. Bake for an hour, until the toothpick is extracted clean. Cool for at least an hour (preferably more) before removing from the pans, slicing and serving.

Note: The bread, although incredibly moist, is not particularly sweet, unlike the more oily, sugary, dense crumb of a carrot cake. Still, make sure you don't use sweetened baby food--or worse, baby food with any added 'savory' ingredients like gelatin. 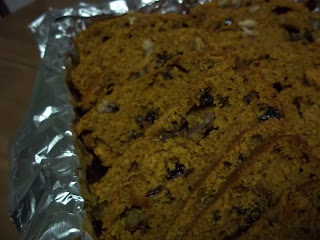 Posted by chewingthefat at 6:50 PM