Apple for the teacher... 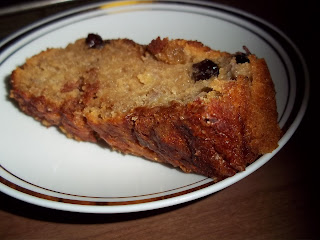 Oh no!  You shouldn't have!

Every amateur baker is familiar with the Awkward Baking Moment, when he or she offers a loaf or a tray of muffins or cookies to a friend or acquaintance.


Instead of eager delight or bemused thankfulness the amateur baker is occasionally greeted with one of two reactions:

Translation: I am on a diet.  Are you trying to spackle calories onto my thighs, only weeks before swimsuit season?

Reaction 2: (Typically male). Are those raisins?

Translation: Your baked good appears to have oatmeal and some sort of dried fruit in it, and is made of whole wheat or oat flour or some other weird, hippy grain. I have been instantly transported back to third grade, when my mother used to force-feed me oatmeal or Cheerios for breakfast.  Fuck you, Quaker Oats dude, and fuck you baking chick with your so-called healthy cookies. Why didn't you consult my preferences before I baked? I want some fucking chocolate!

I always feel a bit perplexed by these reactions, because one of the advantages of being a baker, as opposed to purely a cook, is that you can give food to people that they don't have to--indeed, aren't 'supposed' to--eat right away.

Awkward Meat Moments are far worse. I still recall when I went to a colleague's house in England who didn't know I was a vegetarian. She asked me to dinner after we'd finished working.  Terrified that I would faint from a lack of protein when she learned I didn't eat flesh, she served me what I can only describe as a brick of yellow cheese, wrapped in some very, very buttery eggs that tasted like pure yolk. Served with corn, it was one of the most yellow meals I have ever tried to hide in my napkin.  "But I made it--JUST FOR YOU!" she cried when I tried to explain I'd had a large lunch.

After eating as little as possible, I consumed a Crunchie bar on the way home.  Thank goodness the UK has the good sense to have candy bar vending machines in most of its public transportation hubs! You never know when you may have a Crunchie emergency!

However, if someone offers me a dessert I'm not very fond of, I always feel happy, because I know they were thinking of me--even if the baked good is not one of my favorites.

When I was a pepperoni-consuming child, I always had a strong aversion to spray whipped cream, Jell-O, and coconut (clearly, I died of food poisoning at a Midwestern church potluck in my previous life). However, if someone makes me something with coconut, intellectually I understand that the rest of the 'normal' world doesn't consider this an act of hostility, and I gratefully accept the gift, and am grateful to pass it on with affection to the coconut lovers in my life (you strange, strange people).

I have to say, though, that the most generous gift recipients I know are teachers.  Unlike investment bankers who get cranky if their bonuses aren't in the six figures, teachers always seem happy when their students color them pictures or bring them bagels and doughnuts.

This is the final day of Teacher Appreciation Week.  I'd strongly suggest that you make this bread for one of your teachers. If you're a teacher and you aren't feeling appreciated, I'd suggest you kick back this Friday, crank out some A/V materials to show your kids, and order a pizza for yourself in the middle of class, a la Fast Times at Ridgemont High.  And eat it all yourself.

1. Preheat the oven to 350F. Butter and line a 9X5 loaf pan with parchment, leaving some of the paper overlapping to make removing the bread easier. Reserve the 'topping' ingredients for later.

3. Blend the applesauce, bananas, eggs, oil, honey, and water in another bowl. 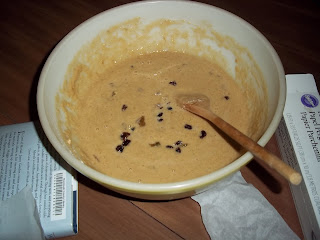 4. Slowly fold in the dry ingredients, mix, and then add the plumped raisins. Lightly dust the raisins with flowers to avoid 'sinkage.' 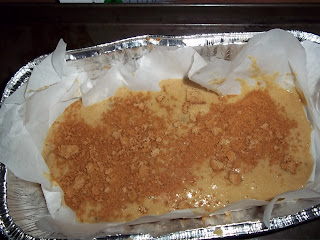 6. Pour the other half of the batter into the pan, top with the remaining cinnamon-sugar mixture.

7. Bake for approximately one hour, until a toothpick can be withdrawn 'clean.'  Cool for an hour.  Better served the next day, after being 'chilled' in the refrigerator, as this allows the flavors to settle.

Posted by chewingthefat at 9:04 AM