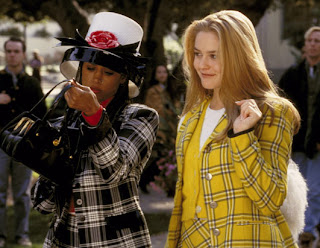 “Hey, Di! Remember me?”
“Um, are you the chick that wipes down the yoga mats at my gym?”
“Noooo…..Dionne, c'mon!”
“The girl that I pay to do my daughter’s homework so she’ll get into Harvard? My Shiba Inu walker?"
“We went to high school together!”
“Oh yeah, you were one of those complicated chicks who used to hang out in the band room, listening to Meat is Murder by the Smiths and playing ‘EZ arrangements’ from Les Miserables on the trombone.”
“Have you been in touch with Cher? She wrote a book—The Kind Diet!  I’m totally buggin’ that she’s become vegan.  You know, I’m a vegetarian.”
“That’s no excuse for not getting a manicure, Mary.”
“Have you tried any of her recipes? Now, I am totally loving the first half of the book. I loved reading about her journey to veganism and trying crazy celebrity diets before going vegan—like her story of going raw in the middle of a freezing New York winter. I can totally relate to trying to live on mango smoothies when it’s zero degrees out, just because you're on some crazy, obsessive diet. Vegetarianism seems so sane by comparison. And some of her nutritional info is pretty sound—like the fact that Americans drink more milk but have higher rates of osteoporosis than anywhere else in the world. Other parts of the book, like saying if you don’t brush the dirt off your vegetables, you can use that as a source of B-12 and coffee gives you wrinkles, not so much. (She does, however, suggest that you use a supplement given the depletion of natural bacteria with B-12 in the soil, due to commercialized agriculture.) Still, as celebrity diet books go, it’s way better than most.” 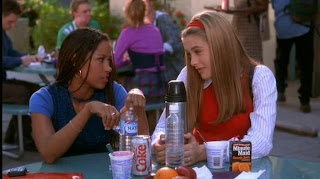 “Wait, are you still talking to me?”
“But back to the recipes, Di—some look really good. But the first one I tried—the macadamia nut pumpkin bread, I had some problems with. First of all, Alicia says that maple crystallized sugar is way better for you than other types of sugar, even unrefined raw sugar.  And maple sugar costs $6.99 for a tiny little package.  For the 2 cups of sugar I’d need to make the bread as written, I’d have to pay more than thirteen bucks even BEFORE I bought the nuts.”
“Girl, you sound like one of those poor people who call Whole Foods ‘Whole Paycheck’ and buy supermarket sushi.”
“I had some other problems too—the recipe calls for FIVE cups of canned pumpkin. Five!  Well, okay, Cher says fresh is better, but she does say you can still used canned. The bread took an hour and a half to cook because the mixture was so wet and sticky. And even then the bread was pretty  unremarkable, and totally overwhelmed by the macadamia nuts. I mean, one cup of WHOLE macadamia nuts—eating this bread was like eating a handful of nuts on top of a really, really super-sweet not very pumpkin-y loaf.”
“Maybe you should give it another try.”
“I did—I tried making banana bread, subbing banana for the pumpkin. That was better, using the five cups of banana, because it was a bit drier and cooked within 45 minutes, like the recipe was supposed to, but still the result was way sweet. Like Hello Kitty meets Betsy Johnson from the 80s-type sweet. And then there is the caste system.”
“The what?”
“Well, Cher divides the book into three levels of veganism. On the bottom of the totem pole are flirts, people just ‘flirting’ with veganism and reducing their use of meat-based products. There are recipes for them like vegan waffle, sausage, and cheese paninis. Next in the caste system are the vegans who avoid animal-products entirely. But the superheroes are supposed to be the best, the people who go totally macrobiotic, no more than one piece of fruit a day, no vegan convenience foods, and no sugar. They eat stuff like dandelion, bok choy miso soup.  I mean, I’m not sure I dig this rating system. You could be macrobiotic and still drive a Hummer, ya know?”
“Mary, you didn’t even 'get' the caste system in high school, so this is way over your head, girl. I'm outtie! And if you see anyone I know (which I highly doubt), don't let anyone know that I was shopping at Wegmans. I only come here to shop when I'm on the East Coast because my kid has developed an addiction to Frosted Flakes.  Stupid nanny." 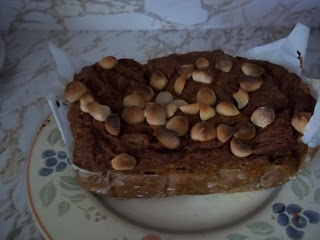 5 cups (!) canned pumpkin
2 cups maple sugar (I admit I used vegan, unrefined organic 'regular' sugar because of the expense of granulated maple sugar. I apologize if this makes the difference between the recipe 'working' and not working to Ms. Silverstone.)
2 tablespoons of flaxseed mixed in 6 tablespoons of water
1 cup nondairy 'nut' milk of your choice
3/4 cup safflower or other non-hydrogenated oil
1 teaspoon vanilla extract
4 cups spelt flour
3 teaspoons baking soda
3 teaspoons baking powder
1 tablespoon ground cinnamon
1 teaspoon ground nutmeg
3/4 cup grain-sweetened nondairy chocolate chips (I admit I left these out. Although I'm not vegan, I wanted to make sure that the recipe was 100 percent animal free, and even the vegan chocolate available in my area has a note on the package that it is processed on machines that also manufacture chocolates with milk solids).
1 cup whole (!) macadamia nuts
Procedure
1. Preheat the oven to 350. Prepare two 9X5 (large) loaf pans with nondairy butter, spray, or parchment paper to avoid sticking.
2. Combine the canned pumpkin, sugar, flaxseeds in water, oil, milk and vanilla in one bowl (your 'wet' bowl, and it will be very 'wet' indeed!). Sift the flour, baking soda, baking powder, cinnamon and nutmeg together.
3. Gradually incorporate the dry mixture into the wet, then fold in 3/4 of a cup of the nuts (and chocolate, if you are using chocolate).  Pour into the two loaf pans. Top with the remaining  nuts and chocolate. Try to avoid tripping on any small, hungry dogs in your kitchen at this point, given that macadamia nuts and chocolate are toxic to the species. (Spilling either in your kitchen would be a very 'unkind' way of cooking from The Kind Diet).
4. Bake until the top is firm and a toothpick can be extracted 'clean.'  Alicia Silverstone suggests this takes about 45-60 minutes, but it took 90 minutes for my loaves to cook, and my oven doesn't 'run cold.'
Option: I also made two loaves with 5 cups of mashed, overripe bananas. This recipe was actually more successful but still I wasn't that pleased with the taste. I still found the bread overly sweet and overwhelmed by the nuts.  It did, however, only take 45 minutes to cook. 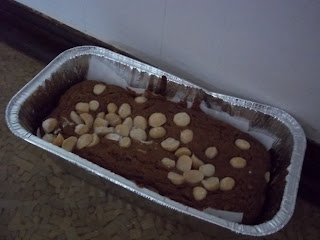 Posted by chewingthefat at 7:52 AM