Lowfat brownies: All good things come to those who wait... 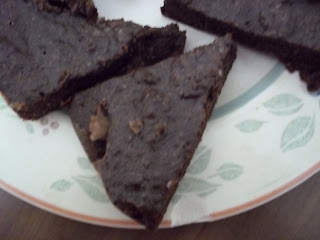 Much of what I ate during the late 1980s and early 1990s could only be tenuously described as 'food' and better classified as what Michael Pollan calls 'edible food-like substances.'

I recall slurping down strawberry-flavored Slim Fast, chewing on the McLean, eating Healthy Choice French Bread pizzas 'cheese first,' and many, many slices of Weight Watchers cookie dough-flavored desserts. I consumed Tasti-D-Lite as if it was a food group. Not coincidentally, like many people who survived on low-calorie snacks, my weight climbed the more diet foods I consumed--because the more I ate them, the less satisfied I felt. (And there is even some scientific evidence that eating artificial sweeteners can slow down your metabolism, which confirms what I always suspected, when my weight refused to budge even when I wasn't overeating due to a aspartame-fused craving).

I have never begun a diet in January (I find the cold winter so depressing that just going through the motions of life can be dispiriting on some days). But as an adult, I am always trying to eat more healthfully--plus pretty much all of my friends are on 'New Year's Resolution' diets right now, even those with the metabolisms of jackrabbits.  So a lowfat, diet-friendly treat seemed called for.

These brownies are extremely low in fat, and even a generous 'cut' of the pan yielding 8 servings will give you a brownie of approximately 250 calories.  Even more importantly, they contain no artificial ingredients.

I could say 'omg! These are exactly like the fudgy, crusty brownies you make with three eggs and a stick of butter' but that would be a lie. They are quite intensely chocolatey, however, and are nice as a snack, with some lowfat Greek or soy yogurt, or even a cup of coffee in the morning.  And make sure to take note of the warning at the end of the recipe....patience is required. With dieting, with all acts of self-improvement, and when making lowfat brownies...

4 squares of unsweetened chocolate (such as Baker's)
3/4 of a cup of unsweetened applesauce (the finer the puree the better--you can use Mott's but unsweetened baby applesauce works even better, since it's usually more finely strained)
1 cup of sugar (I guess, if you're really determined, you could use Splenda, but I wouldn't worry about it too much)
2 eggs (Use 2 regular eggs, not egg whites)
1 cup white whole wheat flour
1 teaspoon to 1 1/2 teaspoons of vanilla
1/2 teaspoon salt

2. Melt chocolate in the microwave or over a simmering pot of water using a bain-marie. The chocolate doesn't have to be liquid, but it should be soft.  Mix in the applesauce with the melted chocolate, then fold in the sugar, beaten eggs, flour, vanilla and salt.

3. Bake for 30 minutes, until still slightly 'underdone' in the center.

4. Cool for an hour--resist the temptation to dig in! Chill OVERNIGHT in the refrigerator.

I stress the OVERNIGHT component very strongly.  A general tip for ALL lowfat baking--quite often, the baked goods are much, much better the day after, especially when chilled. I've heard various explanations for this, but it does seem, based upon my experience, that the flavors have a chance to 'settle' a bit, and the flour is better able to absorb the ingredients.

When I tasted these after 1 hour of cooling and 1 hour of chilling, I thought they were just 'okay' but after an overnight chill, I though they were quite good. And I even tasted one or two 'leftovers' from the freezer, and thought that this gave them an additional, nice fudge-like consistency and flavor.

Waiting also has a dietary advantage, because it means if you make the brownies properly, you're not allowed to stuff them in your mouth as soon as they come out of the oven. As we all know, as soon as you start to 'even off' that pan of freshly-baked brownies, you start to make little rationalizations like 'how many calories could that crusty bit in the corner REALLY be'....
Posted by chewingthefat at 8:15 AM