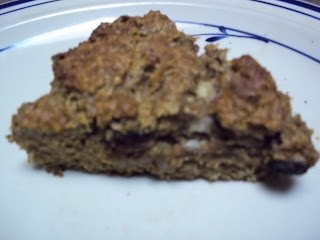 Recently, I was forwarded a very nice article by my yoga studio, about the benefits of practicing yoga. However, I must admit that I did a double-take when I saw this phrase:

"Yoga has had a profound cleaning effect in me, within the physical plane it is very obvious, I learned to perform neti pot nose cleansings, to do stomach churnings, I can’t wait to have a colonic..."

Okay, I'm totally with you about enjoying a sense of community, which I don't get when I work out alone. And I'm very thankful that I no longer get intense back spasms when I'm working at my computer. Maybe I'll even be able to get through a riding lesson one day without my 'tricky hip' pointing my toe in a weird, incomprehensible angle that confuses my horse.

But when it comes to the fact that someone has had a colonic irrigation, the phrase 'thank you for sharing' leaps to mind.  Trust me, I'm not saying I'm above the physical world, and maybe I've studied too much Victorian literature. But some things, I think, are best left to you and whatever weird health websites you Google when you experience digestive discomfort.

I realize I'm probably alone in these sentiments, given that so many cereal boxes proudly proclaim their massive fiber content. Go!  Have that hamburger, because only one bowl will completely purge you of all the toxins you ingest!
How I miss the cartoon characters of my youth when I see cereal boxes such as this one!

I'm rather amused by blog posts featuring bran recipes. Some are absurdly spartan.(Does anyone really think that onion rings sprinkled with All Bran  taste just like the fried hoops of grease they sell in paper cups on the Boardwalk?). Others recipes begin with an introduction along the lines of 'well, I've been writing quite a bit about bacon, so I thought I'd make these raisin bran muffins with butter and sour cream.'

This is just a very good low-fat raisin bran recipe. It's not crazy decadent with cream and Plugra, and it's not made with twigs and psyllium husks. It's not the Master Cleanse. It doesn't make you think of that old Saturday Nigh Live sketch for Colon Blow (a mythical product that is beginning to resemble the modern marketing of cereal far too closely). It's just a nice, tasty way of getting your raisin bran fix without lots of high fructose corn syrup (ahem, Kellogg's) but doesn't make you feel as if you're engaged in penance, rather than eating pastry. 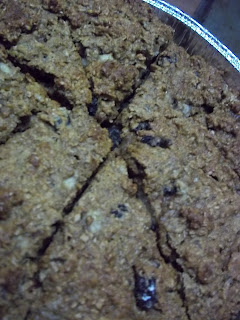 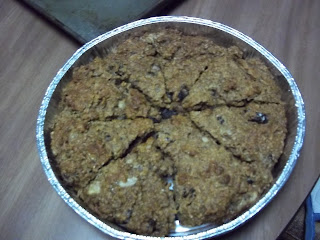 Procedure
1. Grease or line with parchment an 8x8 round or square pan or 12 muffin liners
2. Preheat oven to 400F
3. Mix sugar into the egg, fold in the mashed banana and applesauce, followed by the honey or golden syrup
4. Sift the flour, bran, baking soda, and cinnamon together. Fold the dry mixture into the wet mixture.
5. Lightly flour both kinds of raisins, to prevent sinking (this is especially important if you are using a muffin tin).
6. Fold in the raisins.
7. Bake for 15-20 minutes until the top is crackly, but the bread is still soft and springy to the touch.
8. Cool. If using a pan, cut into 8-12 slices.
Posted by chewingthefat at 6:37 PM