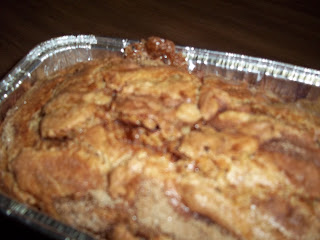 When I was ten years old, I went on strike for the first and last time in my life.  The Great Phonics Strike of 5th grade wasn’t a planned event. I had always disliked phonics in school, given that I had already come to school a Reader, and it seemed pointless to spend time drawing short and long vowel sounds over a,e, i, o, u when I already knew what the words were supposed to sound like. Patiently, I tolerated the subject until 5th grade, when my teacher  Mrs. J, seemed  bound and determined to get through the entire phonics workbook by Christmas break.  I forget exactly when I decided she had gone too far (Ten pages? Or was it only six in a night?)  However, soon I simply stopped bringing home the workbook.
“You’ll have to make it up,” she told me, when she saw that my workbook was blank yet again.  “Or else.”
“As long as I know how to read it, why do I have to do all of these boring drills?”
After several weeks, it gradually became clear to Mrs. J that even the most dedicated 5th grade student was not going to do 30 plus pages of make-up phonics homework. She demanded that I be pulled out of the AT (Academically Talented) program at my school until I had done every required phonics exercise correctly. Since this was the only class I remotely enjoyed, Mrs. J clearly had some dim sense of the little pull she had over my tiny, grade school psyche.  I asked my AT teacher to intervene.  She said she would talk to Mrs. J, but could promise me nothing.
“She really does have a bit of a mania about phonics,” admitted my AT teacher.
“I told you!” I said.
Then something truly catastrophic happened—a snow day. I say catastrophic, because I had been psyching myself up to say, at least do the phonics that was required for that day of school. However, the snow day convinced me that my deep, stubborn belief that that phonics was wrong had been confirmed by divine intervention.
A game of chicken with the weather followed for the next few weeks. I would pray for snow, and sometimes the snow would happen. I would be given a reprieve, and when we returned to school, quite often there wasn’t enough time for phonics.  Or there would be a delayed opening, compressing the day to the point when phonics would be bumped out of the schedule.
Later, this period would be instructive in college when studying how societies developed strange rituals and taboos designed to bring about good fortune. I determined that snow days were more likely when I carried my lucky gold horse key chain. When that talisman failed, I decided it was my lucky red turtleneck sweater.
Then I decided it was if I read my favorite book of Greek myths before bed AND wore my red turtleneck and carried the key chain.  I am probably the only person in my age group ever to have prayed to Zeus. Unfortunately, it didn’t sink in that ancient Greece was a singularly poor place to turn to, in search of snow-friendly deities.
Eventually, my rituals failed me and Mrs. J informed me that she would NOT let me go to AT ANYMORE. A meltdown ensued that resulted in my parents being called in for a conference, and my being transferred to another teacher’s class for the rest of the year.  To Mr. F’s room, who assigned one page of phonics every few days or so.  And Mrs. J’s class was already so far into the phonics book, even before I staged my strike, I don’t remember doing phonics for the rest of the year.
As an adult, I don’t get snow days and I loathe snow’s disruption to my routine—and shoveling. However, I still remember the comfort of snow days—sitting in the wooden-paneled kitchen of my old house, eating blueberry Pop Tarts or buttered cinnamon toast and hot chocolate, hoping that the radio announcer would call my school’s name, first as delayed, then as closed (they always seemed to announce a delay first, then a closure, unless it was really bad). In the era of the Internet where closings are announced online, it’s hard to believe how much I enjoyed waiting for that announcement, almost as if my school was briefly famous—but I vividly recall the blessed relief knowing that for at least one whole day, homework didn’t exist.
My mother never baked, but this is a tasty, wholesome cinnamon raisin bread that’s ideal for breakfast, even on a non-snow day. It involves no yeast, so it can be whipped up  quite quickly—far more quickly than 5th grade phonics homework. 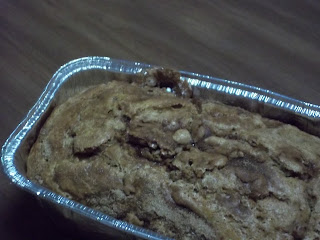 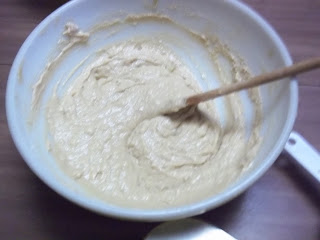 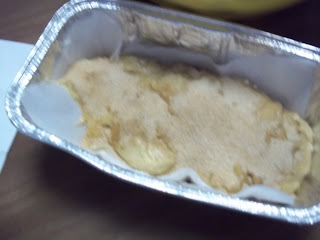 4. Bake for 45-50 minutes, until a toothpick can be extracted cleanly.

5. Cool for at least an hour, until the sugar topping has hardened.
Posted by chewingthefat at 5:46 PM