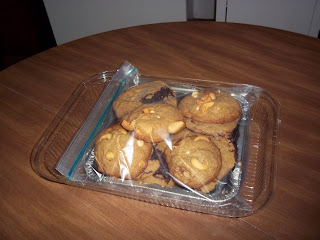 There are certain things that I like, I've come to realize, that not many other people seem to like. I try to keep my mouth shut about my love of:
Now, I know I'm supposed to say: "oh, I FORCE myself to use whole wheat because it's healthier." But to be honest, I have a kind of unusual palate, I guess. I wonder if it's because I never ate white bread growing up. My mother made even my peanut butter and jelly sandwiches on rye bread. When I was in elementary school.

I still don't like rye, but I find whole wheat to be much more interesting, flavor-wise. I know I should think that having a teeny weeny taste of a 'real' chocolate chip cookie with white flour is better than a big bite of a whole wheat cookie, but I don't. I also like the fact that whole wheat things, even though they aren't necessarily less caloric, don't give me that nauseous sugar hangover that overly sweet things tend to bring on, after an hour or so.

Well, I did, and I liked them!  I adapted the recipe from the Hillbilly Housewife, who writes that these are are perfect for people who are 'real uptight about food and nutrition.'   My goodness, it's like they were made for me!

I love this recipe because it only uses one type of sugar (light brown) as well as one type of flour. (I'm uptight, yet cheap and lazy about buying lots of different kinds of flour).  The recipe is even easier than the Toll House recipe, which uses both white and brown sugar.

2. Cream the softened butter and brown sugar in a bowl. Add the eggs and the baking soda. Stir until well-incorporated, almost the texture of wet clay. Then add in the flour, about a 1/4 cup at a time.

3. It's suggested that you chill chocolate chip batter for 36 hours in the refrigerator before baking--I didn't, but to be honest it probably would yield superior results, particularly for whole wheat flour which requires more time to absorb moisture. I have impulse control issues, however, and wanted to bake these right away.

5. The original recipe makes 3 dozen, but I made 18, since I was giving these as a gift and wanted them to look large and spectacular.

7. Cool and remove from the parchment with a spatula.

8. I had to chill the cookies with the cut-up cookie bar for the chocolate to 'set.' While not as pretty as pre-made chocolate chips, I admit I prefer 'real' chunks of extra dark chocolate, taste-wise. 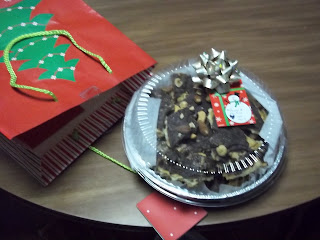 I also made some more saltine nut brittle. 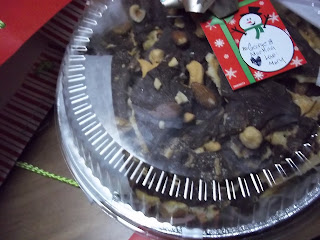 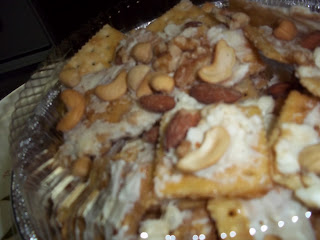 One batch with dark chocolate and salted mixed nuts, the other with white chocolate.  Just to show that my apparent love of healthy eating is a veneer.

Stop me before I nut brittle again!  It's becoming an addiction.  I have the sudden urge to make it for everyone I know, kind of like Truman Capote's dotty but lovable relative made fruitcakes for everyone--including President Roosevelt--according to his short story "A Christmas Memory."
Posted by chewingthefat at 9:38 PM