Pay no attention to the baking failure that occured after these cookies... 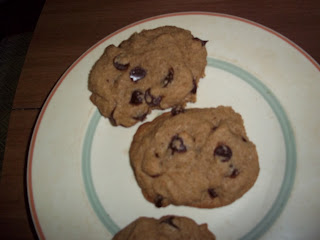 Today, I decided to throw together a batch of shortbread. After all with three ingredients, this recipe seemed foolproof.  However, when I was kneading the mixture together, I began to get suspicious at the rather crumbly texture of the dough and even after baking, the cookies were loose, powdery, and not particularly flavorful. So they were 'circularly filed.'

I suppose this makes me officially a Bad Person, but I've never had much compunction about throwing out baking or cooking failures. Life is too short to eat--or to give--bad cookies.  My way of 'not wasting' tends to be to buy only what I need, nothing more, not to force myself to be a member of the 'clean plate club' when I'm not that happy with what is on my plate....and maybe it's not that PC, but if you're going to cook, especially when you're learning to cook, you're going to end up wasting some food when you 'fail' every now and then...I just like to think that the waste from 'experimenting' is balanced out by NOT buying as many packaged goods.

At least the shortbread made the house smell nice.
Posted by chewingthefat at 5:36 PM