I know, I know. Everyone is making decadent cookies and cakes for the holiday season, or coming off of a latke-induced food coma.  However, just in case you feel a need to do a slight baking detox, and take a breather betwixt and between the dark chocolate Hanukkah gelt and molasses crinkle cookies dusted with confectioner's sugar.... 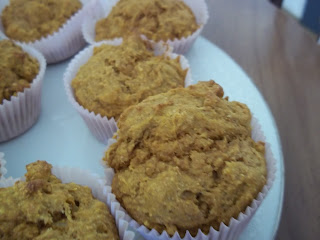 I was inspired to make these after hearing Mike Colameco's radio program "Food Talk," in which the host recounted an interview he had with the owners of King Arthur Flour. The Mighty Knight of the milled grain industry remarked that one reason people tend not to like whole wheat baked goodies as much as those made from refined white flour is because of the drier, grittier texture of the wheat.

So I thought: but pumpkin is very moist--ridiculously moist.  So it seemed like a great idea to throw all that I'd heard about how you can NEVER use all whole wheat flour, and always have to 'chase' it with some white or all purpose stuff when baking.

Usually, when I cast common wisdom to the winds, disaster occurs. But, like the discovery of Excalibur miracles do happen.

The muffins I made contain no milk products, but they do contain eggs. So they're not suitable for strict vegans, only for vegetarians who eat free range eggs.

1. Preheat the oven to 375F
2. Prepare enough muffin tins for 12-18 muffins, either greasing or using cupcake liners.  Or, if you're like me, realize that you only have 10 cupcake liners left.  In which case, you use the ten, and then grease 8 cups of the tins.
3. Sift the dry ingredients together.
4. Blend the wet.
5. Blend the wet and dry together, until just incorporated, but not over-beaten.
6. Fold in the add-ins.  (I actually poured half the batter 'plain,' and then added in the nuts into the remaining half, to yield two different kinds).
6. Fill the muffin tins.
7. Bake for 20-25 minutes until the muffins pass the toothpick test. (Hint: if the toothpick comes out wet after the first test, don't reuse the toothpick. As I did, although I realized how stupid that was and on the second test realized that the second toothpick was in fact 'clean'). 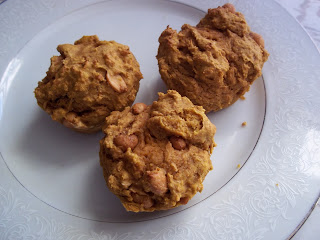 8. You're done! I told you--so easy, you can throw this together in-between your Serious Baking.
9. I thought, due to the moistness of the pumpkin, these tasted quite good out of the oven, but I expect they'll taste even better tomorrow. These are very much not a 'sweet' muffin, and more like a bread, but I rather like the fact that the ones with the nuts allow the ingredients to shine, and I quite like the strong pumpkin flavor of the plain.

Note: I checked the calorie count on several recipe sites as well as with my own calculations, and depending on the type of almond milk you use and the type of add-ins, 18 muffins should average around 150-200 calories.

Posted by chewingthefat at 1:32 PM